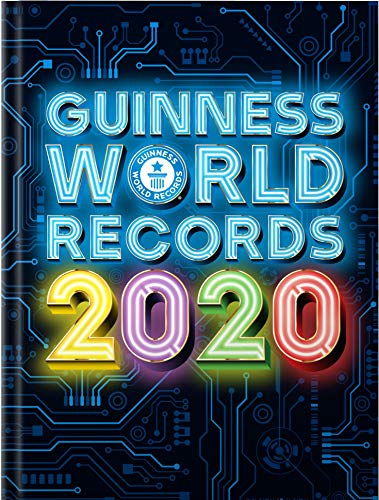 Celebrate the dawning of a new decade with the fully revised Guinness World Records 2020. To kick off the '20s, we've created an electrifying new cover and curated a record-breaking edition packaged with thousands of new, updated and classic superlatives, hundreds of never-before-seen images, and a selection of eye-opening photo-composites that put a new spin on record-breaking... A new decade means it's time for a fresh approach, so starting with our front cover, we've re-booted record-breaking with an all-new design. There's a new look inside, too, and thanks to our team of digital artists, we've created mind-blowing poster pages that will reveal some of our classic record holders in a whole new light. Our ever-expanding pool of international consultants and experts help us make sense of the world around us, so join us as we explore the vast spectrum of record-breaking in 11 superlative-packed chapters. As always, we're committed to bringing you record-breaking from the cutting edge of science, and this year we've produced a feature chapter on remarkable robots with the help of award-winning tech blogger Evan Ackerman. We've also been out on the road, adjudicating records at events as diverse as the UK National Pet Show, Skill Con in Las Vegas and BubbleFest in Wales. Guinness World Records is nothing without its dedicated record-breakers, so we've also selected the best of the newly approved claims from the 50,000 applications received from the public over the past 12 months. If you want to be one of those lucky few, look out for the Do Try This At Home challenges in the VIRAL SPORTS chapter - you might even make it into next year's edition!

In 1951, Sir Hugh Beaver, the then managing director of the Guinness Brewery, went on a shooting party and became involved in an argument. Which was the fastest game bird in Europe - the golden plover or the grouse? He realized then that a book supplying the answers to this sort of question might prove popular. He was right! Sir Hugh's idea became reality when Norris and Ross McWhirter, who had been running a fact-finding agency in London, were commissioned to compile what became The Guinness Book of Records. The first edition was bound on August 27, 1955, and went to the top of the British bestseller lists by Christmas that year. Since then, Guinness World RecordsT has become a household name and the global leader in world records. No other enterprise collects, confirms, accredits and presents world record data with the same investment in comprehensiveness and authenticity.