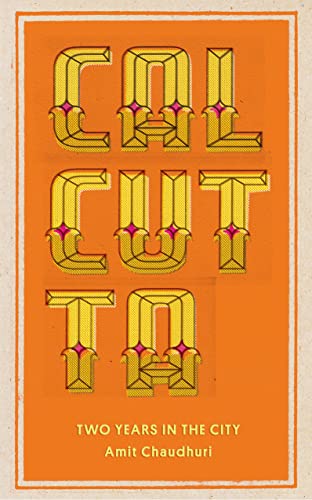 ‘Like its structure, the book’s meticulous phrasing and seductive charm echo the allure of a self-concious city whose history is not to be found in libraries. Already a poet, musician, critic and novelist, in Calcutta Amit Chaudhuri bravely - and brilliantly - embraces new form that is, in many ways, the expression of the city itself.’

'This personal account of two years living there, 2009-2011, is written in typically elegant prose.’

‘A forensic portrayal – that crackles with honesty and swoons with tenderness – of a city at the heart of India’s change. One that resists and embraces it in equal measure.’

'Chaudhuri concentrates on the everyday and there’s something admirable about the calm confidence of his unelectric narratives - of buying some vintage windows, of a street food vendor or a friend of the family. His India isn’t only the exotic other we’re still so invested in, and his truths, quietly disclosed, are highly valuable.’

'Concussed by the noise of the new and beguiled by echoes of the past, Chaudhuri maintains his novelists eye and ear for Calcutta’s character and citizens. He combines the serendipity of the flaneur with the sensitivity of the social historian.’

'What’s a memoir when you don’t have memories? Amit Chaudhuri brings his literary imagination to create his childhood home from scratch. Chaudhuri picks up the exploration of unreliable memory where Proust and Nabokov left off.’

'Chaudhuri’s trysts with the past are entrancing in their lyricism, and simply stunning in their intelligence and percipience,’

‘Chaudhuri’s highly personal preoccupations provide an insight into how Calcutta is attempting to adapt to globalisation. The essays add up to a warm, vivid and often humorous portrait of his birthplace.'

‘Calcutta, a non-fiction account of the present-day city, has a leisurely, discursive feel, offering asides on the Bengal craze for Italian food and the snobberies of the city’s fast-dwindling anglophone Indian class. Chaudhuri, a fastidious if elegant writer, nevertheless keeps the pages turning. Like VS Naipaul before him, Chaudhuri weaves his reportage with bibliographic allusions and excels at revealing the spirit of his chosen place. Wise and subtle, Chaudhuri wears his erudition lightly and weaves personal anecdote into enduring reportage.’

‘This surprising book works for many reasons. The range of angles from which he approaches these places gives the book great depth. The historical, the haphazard, the literary and intellectual – and the personal, for this is where his parents live and his father is fading. Chaudhuri's Calcutta has a different scope and intention to Suketu Mehta's Maximum City (about Mumbai) and to William Dalrymple's City of Djinns (about Delhi), but like those books, it succeeds brilliantly in making sense of a place few of us can know.’

In 1999, Amit Chaudhuri moved back to Calcutta, the city in which he was born. It was a place he had loved in his youth and the place he had made his name writing about. But upon his return he discovered that the Calcutta of his imagination had receded and another had taken its place.

Lyrical, observant and profound, Calcutta is a personal account of two years (2009–2011) spent in one of the least known – yet greatest – cities of our time by one of our leading novelists. Using the historic elections of 2011 as a fulcrum, Chaudhuri looks back to the nineteenth century, when the city burst with a new vitality, and towards the twenty-first, when – utterly changed – it seems to be on the verge of another turn.

Along the way he evokes all that is most particular and extraordinary. From the homeless and the working class to the old, declining haute bourgeois; from the new malls and hotels to old houses being destroyed by developers; from politicians on their way out to the city’s fitful attempts to embrace globalisation, Calcutta brings a multifarious universe to life.

1. Calcutta: Two Years in the City

2. Calcutta: Two Years in the City

3. Calcutta: Two Years in the City

6. Calcutta: Two Years in the City