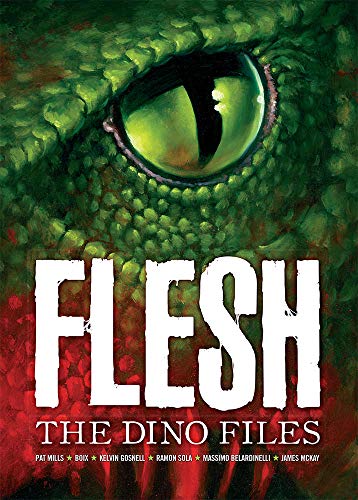 Why did the dinosaurs become extinct? Was it due to a meteorite collision, a big freeze or a killer disease? The truth is far more incredible than any of these things and this graphic novel brings you a science-fiction story like no other. Cowboys, massive prehistoric lizards and time travel collide in this classic tale from the 2000 AD Thrill archive, collected together for the very first time in graphic novel form. So get your teeth into Flesh! Co-written by Pat Mills (Slaine), with art by Ramon Sola and Massimo Belardinelli (Ace Trucking), amongst others, this is 2000 AD at its Thrill-packed best!

KEN ARMSTRONG Ken Armstrong scripted an episode of Dan Dare and several episode of Flesh for 2000 AD. STUDIO GIOLITTI Studio Giolitti scripted several episodes of Flesh for 2000 AD. KELVIN GOSNELL Kelvin Gosnell served as 2000 AD's second editor, from Progs 17 to 85. He also wrote Blackhawk, Dan Dare, A Joe Black Adventure, Judge Dredd, One-Offs, Project Overkill, Ro-Jaws' Robo-Tales, The Stainless Steel Rat and Tharg's Future Shocks, as well as co-writing the first series of Flesh. GEOFFREY MILLER Geoffrey Miller scripted the second book of Flesh for 2000 AD. PAT MILLS Pat Mills is the creator and first editor of 2000 AD. For the Galaxy's Greatest Comic, he is the writer and co-creator of ABC Warriors, Finn, Flesh, Nemesis the Warlock, Slaine, M.A.C.H 1, Harlem Heroes and Savage. He also developed Judge Dredd and wrote one of the early Dredd serials, The Cursed Earth. He wrote Third World War for Crisis!, a politically charged spin-off from 2000 AD, and Black Siddha for the Judge Dredd Megazine. Outside 2000 AD he is the writer and co-creator of the long-running classic anti-war story Charley's War, as well as Marshal Law. He has also written for the Batman, Star Wars and Zombie World series for the US market. Currently Mills is writing the bestselling series Requiem - Vampire Knight for Editions Nickel of France with artist Olivier Ledroit and a spin-off series Claudia - Vampire with artist Frank Tacito. He is also completing the graphic novel version of American Reaper co-created with Clint Langley, based on his screenplay for Xingu Films.