Artículos relacionados a Fortune's Spear: The Story of the Blue-Blooded...

Vander Weyer, Martin Fortune's Spear: The Story of the Blue-Blooded Rogue Behind the Most Notorious City Scandal of the 1920s

Fortune's Spear: The Story of the Blue-Blooded Rogue Behind the Most Notorious City Scandal of the 1920s 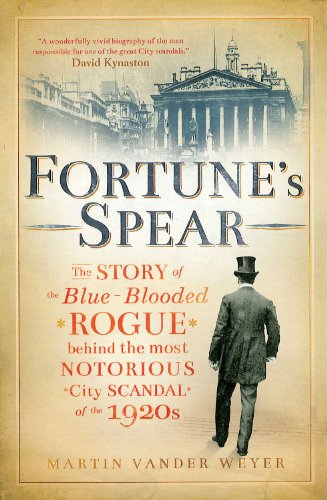 A wonderfully vivid biography of the man responsible for one of the great City scandals. The world that Martin Vander Weyer recreates with a novelist's flair and historian s attention to detail may be long gone, but this very human morality tale of high talent and high connection fatally compromised by a flawed character is timeless. --David Kynaston, author of 'City of London: The History' Exciting stuff ... It is a rattling good yarn and leaves you wondering whether the man had a rotten core from the beginning or whether it was addiction to money and social position which seduced him into crime. It is a cautionary tale. --Martin Jacomb, 'The Spectator' This well-researched and well-written book is more than the story of a City scandal. It is a fascinating slice of social history and a rumination on fraud and folly. --Allan Massie, 'The Scotsman' 'Fortune's Spear' is a splendidly rich account of a fraud that both symbolises its own era and prefigures our own. Unlike many financial writers, Vander Weyer writes so clearly that even a financial illiterate like myself can just about grasp what he is getting at. He also has a wonderfully broad frame of cultural reference. --Craig Brown, Book of the Week, 'Daily Mail'

Gerard Lee Bevan was the model of an Edwardian swell - arrogant, smooth, well-connected and highly cultured. He married money and influence - his wife Sophie Kenrick was a cousin of the future prime minister Neville Chamberlain - and over the years he kept a string of showgirl mistresses. But his was a success built on fraud and deception, and eventually Bevan could sustain the fiction no longer. After a series of desperate swerves, he fled the country on 8 February 1922, abandoning his family and leaving his stockbroking and insurance empire in ruins. Thus began an extraordinary flight across Europe - disguised as a Frenchman, using a stolen passport, with his mistress at his side. His subsequent arrest in Vienna, and the Old Bailey trial that followed, would shock the entire country. 'Fortune's Spear' is a parable of the way in which the prospect of easy money draws risk-takers in every era into a spiral of greed and deceit. Bevan may have been forgotten, but he richly deserves to be remembered. Drawing on c ontemporary evidence and told with novelistic flair, Martin Vander Weyer's gripping biography brings him vividly to life.