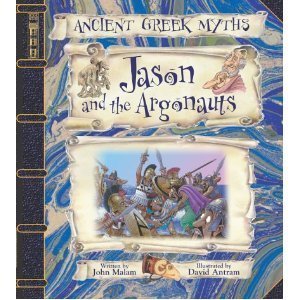 Step back in time to a golden age of storytelling in Ancient Greece. Drawing on the epic literature that has captivated the imagination for centuries, each story is skillfully brought to life, combining the talents of some of the leading children's authors and illustrators working today. Young readers will love these timeless tales of heroism, gods and monsters. Every nine years, the Athenians have to send a sacrifice of seven young men and women to Crete. These victims meet a gruesome end in the jaws of the Minotaur. Only Theseus can end this cycle, but he will need the help of a princess, a famous craftsman and a ball of thread. Will he survive? The humorous cartoon-style illustrations and the narrative approach encourage readers to get emotionally involved with the characters. 'Ask the storyteller' boxes give peripheral details about the narrative and the characters involved. The book features an introduction to Greek storytelling, a glossary and index, as well as 'Who's who' section with a pronunciation guide.

James Ford studied English and Classics at Worcester College, Oxford, before teaching English in Greece. He now lives and works in Brighton.; Gary Andrews graduated from Exeter College of Art. His illustrations have covered everything from children's books to advertising and animation.