Artículos relacionados a Pirc Alert!: A Complete Defense Against 1. e4 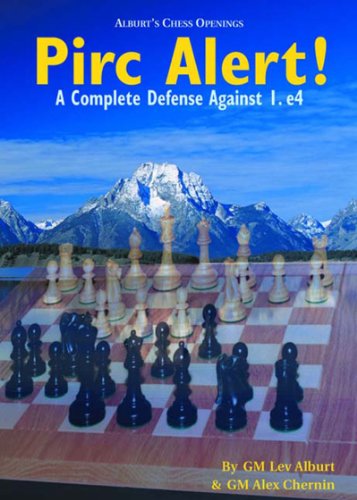 Packed with surprise-weapons, Pirc Alert! gives you everything you need to know to defend against White's most popular way of starting the game. Alburt and Chernin explain both the winning ideas as well as the moves of the Pirc Defense, a dynamic system used by the world's chess elite. The perfect companion to Alburt's Comprehensive Chess Course, this book makes use of time-tested educational techniques to make it easy for you to read and remember. The most important principles and positions are highlighted in color. Lesson previews and unique "memory markers" lock in what you've learned. Frequent diagrams allow you to study without a board. Pirc Alert! is the first volume of the brand-new three-volume series, Alburt's Chess Openings, which will give you all the opening knowledge essential to playing this phase of the game like a master. Two-color illustrations throughout. "Pirc Alert!...does a fine job at being thematic while offering enough analysis to satisfy anyone who wants to adopt the defense that runs 1 e4 d6 2 d4 Nf6 4 Nc3 g6."-Andy Soltis, Chess Grandmaster, New York Post, June 3, 2001

International Grandmaster Lev Alburt, three-time U.S. champion and former European champion, is one of the most sought-after chess teachers in the world. He lives in New York. World-championship candidate Grandmaster Alex Chernin lives in Budapest and is the leading expert on the Pirc.