Artículos relacionados a Progress, Poverty and Exclusion: An Economic History... 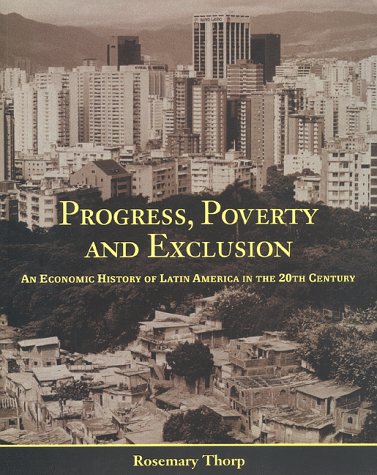 "This valuable and densely packed book is the core outcome of a commission from the Inter-American Development Bank. May all their investments prove equally fruitful!" -- Charles Jones, Business History

"Rosemary Thorp has produced an accessible text that will be applauded by the specialist and welcomed by the informed reader, whether interested in Latin America or comparative development." -- Colin M. Lewis, Journal of Development Studies

What did the Latin American economies achieve in the course of a hundred years? Per capita income increased fivefold, yet today it is lower in proportion to the industrial countries than it was a century ago. Modern infrastructure was built and industry grew to 20 percent of GDP, but the region's share of world trade was halved. Social indicators such as life expectancy and literacy improved dramatically, but inequity and poverty worsened.

This comprehensive economic history examines the political, institutional and economic forces that shaped Latin America's complex and often paradoxical development process over the twentieth century. By examining quantitative data alongside the region's political economies, the book provides historical context for the development strategies, choices, successes, and failures of the Latin American countries.

Moving chronologically through the century, the book focuses on two dramatic waves of expansion that shaped regional growth: first, an export boom as the century began, and second, import-substitution industrialization corresponding to renewed expansion of the international economy following the Depression and the two World Wars. Following the debt crisis of the 1980s, Latin America at century's end has returned to where it began, with reliance on the free market and export-led growth. However, the book outlines the changes in economic structures and approaches that make today's economic scenario radically different from the old.