Artículos relacionados a Sovereign City: The City-State Ancient and Modern:...

Sovereign City: The City-State Ancient and Modern: The City-state Through History (GLOBALITIES) 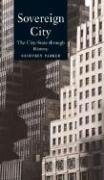 Sovereign City examines the nature of the city-state's changing role and traces the evolution of the city as a political entity from ancient times, when it flourished, to the present day, when it is of much diminished importance. Geoffrey Parker examines the city-state as a geopolitical form, as well as its distinctive place within a range of types of states. The rise of the city-state in ancient times is analysed with particular reference to the Greek polis, which Plato and Aristotle considered the perfect type of state. He also examines the Roman example of city-state as imperial capital, as well as the political role of the city in the early Islamic world, assessing the extent to which the term 'city-state' is applicable. He goes on to consider the revival of the European city-state in late Medieval and Renaissance Italy, tracing its extension to northern Europe. The importance of the city-state, as one of the principal forms of geopolitical organization in early modern Europe, culminated with the Hanseatic League of city-states located around the Baltic and the North Sea. The relationship of the League with other emerging types of state, particularly the nation-state, is examined, and the extent to which the nation-state was a cause of the city-state's decline is addressed. The author concludes with an examination of the role of the city-state in the contemporary world, focusing on its re-emergence in parts of the Far East and the Islamic world in the post-imperial era. In this context, he assesses the possible role of the city-state in the twenty-first century and beyond.

Geoffrey Parker is Honorary Senior Research Fellow in Political Geography and Geopolitics, University of Birmingham, uk. His previous books include Geopolitics: Past, Present and Future (1998), The Geopolitics of Domination from the Ottoman Empire to the Soviet Union (1988) and The Logic of Unity (1986).