Artículos relacionados a Hammer Of God 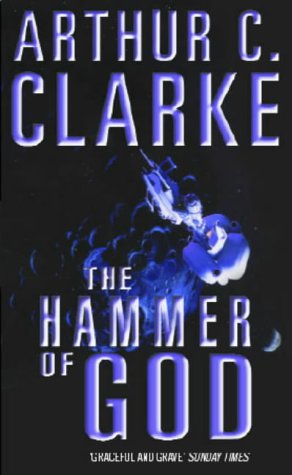 Arthur C. Clarke is awesomely informed about physics and astronomy, and blessed with one of the most astounding imaginations... (NEW YORK TIMES)

For many readers Arthur C. Clarke is the very personification of science fiction (THE ENCYCLOPEDIA OF SCIENCE FICTION)

Arthur C. Clarke is one of the truly prophetic figures of the space age ... The colossus of science fiction. (NEW YORKER)

It is an amateur astronomer on Mars who first spots the previously unchartered asteroid, falling sunwards. And when the scientists of project Spaceguard compute its orbit, they christen it Kali, the Hindu goddess of destruction.

It is 2109, sixty-five million years since the reign of the giant reptiles was ended. And now Kali threatens a similar fate for mankind. As Captain of the research vessel, Goliath, Robert Singh is in charge of an operation that has been long planned but never before put into action - the immense task of pushing an asteroid off its course. But even the most meticulous planning cannot anticipate the human factor.

Look out for more information on this book and others on the Orbit website at www.orbitbooks.co.uk

1. The Hammer of God