Artículos relacionados a The Eye Of The World: Book 1 of the Wheel of Time:... 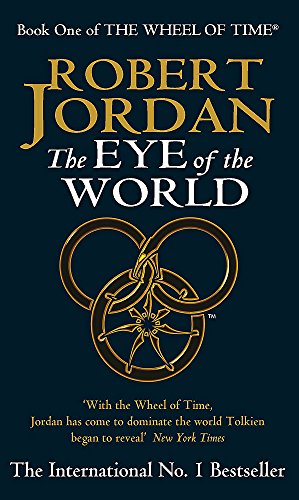 Epic in every sense (THE TIMES)

[With} The Wheel of Time, Jordan has come to dominate the world Tolkien began to reveal (THE NEW YORK TIMES)

The Eye of the World and its sequels in Robert Jordan's Wheel of Time series show the extent to which one can go with a traditional fantasy framework, with added gusto. Stock elements are abound: a reluctant hero--in fact five humble village folk--plucke (To his publisher's credit, Jordan's books are fortunate among fantasy novels in not having covers that look like an explosion of a teenager's bedroom. The absence of such lurid artwork is, perhaps, part of their appeal.')

Life in Emond's Field has been pretty boring for Rand Al'Thor and his friends until a strange young woman arrives in their village. Moraine is an Aes Sedai, a magician with the ability to wield the One Power, and she brings warnings of a terrible evil awakening in the world. That very night, the village is attacked by bloodthirsty Trollocs - a fearsome tribe of beast-men thought to be no more than myth. As Emond's Field burns, Moraine and her warrior-guardian help Rand and his companions to escape. But it is only the beginning of their troubles. For Moraine believes Rand Al'Thor is the Dragon Reborn, and that he is fated to unite the world against the rising darkness and lead the fight against a being so powerful and evil it is known simply as the Dark One. Part One of the opening volume to Robert Jordan's classic Wheel of Time series, The Eye of the World continues with TO THE BLIGHT, also available in March 2003.

The Eye of the World (Wheel of Time)