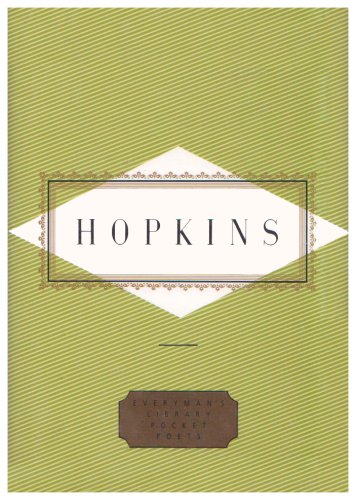 The greatest English religious poet of the nineteenth century, Gerard Manley Hopkins (1844-89) was a Jesuit priest and literary scholar whose life ended prematurely after his exhausting pastoral work among the slums of Liverpool and Dublin. His poems are dazzling celebrations of God's endless creative power couched in a uniquely expressive poetic diction, and all his mature poetry is her reprinted, together with illuminating fragments from journals, letters, sermons and lectures in which he expounds his literary and religious outlook.

The poems in this book are dazzling celebrat ions of God''s endless creative power couched in a uniquely e xpressive poetic diction. '

Descripción Everyman, 1995. Hardcover. Condición: Good. Good condition is defined as: a copy that has been read but remains in clean condition. All of the pages are intact and the cover is intact and the spine may show signs of wear. The book may have minor markings which are not specifically mentioned. Most items will be dispatched the same or the next working day. Nş de ref. del artículo: wbb0013521479