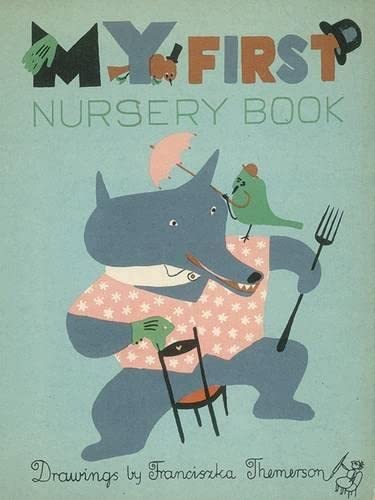 "My First Nursery Book" tells the stories "Who Killed Cock Robin?", "The Gingerbread Man", "Three Little Pigs" and "The Three Bears" with uniquely beautiful period illustrations that look as fresh and vital today as they did six decades ago. A true masterpiece of book design and illustration, the book was first published in 1947 and has been unavailable for over sixty years. Themerson was a Polish avant-garde artist and filmmaker who turned to children's book illustration as a refugee in London in the 1940s, discovering a talent that is unique in the field. As the critic Jasia Reichardt explains in an accompanying note on the artist, she never patronises her audience, but 'treats her readers as partners in the discovery of the...minutiae of life. And this clarity is matched by the wit, charm and originality of the design and illustrations.'Lovingly republished from the original proofs to its original specification, this classic children's book is now made available to a new generation, so that children once again can discover just how beautiful the best storybooks can be.

Franciszka Themerson was a leading Polish avant-garde artist and film-maker before the war. She left Warsaw for Paris in 1937, and in 1940 fled to London, where, in 1948, she and her husband Stefan founded the influential Gaberbochus Press, publishers of Kurt Schwitters, Jankel Adler and Alfred Jarry, among others.

Descripciůn Tate Publishing, Limited, 2008. Condiciůn: Good. 1st Edition. Ships from the UK. Former Library book. Shows some signs of wear, and may have some markings on the inside. Nļ de ref. del artŪculo: 17926668-20

Descripciůn Tate Publishing, 2008. Hardcover. Condiciůn: Used; Good. **Simply Brit** Shipped with Premium postal service within 24 hours from the UK with impressive delivery time. We have dispatched from our book depository; items of good condition to over ten million satisfied customers worldwide. We are committed to providing you with reliable and efficient service at all times. Nļ de ref. del artŪculo: 1676855

Descripciůn Tate Publishing, 2008. Hardcover. Condiciůn: Used; Good. **SHIPPED FROM UK** We believe you will be completely satisfied with our quick and reliable service. All orders are dispatched as swiftly as possible! Buy with confidence!. Nļ de ref. del artŪculo: mon0001988756

Descripciůn -, 2009. Hardcover. Condiciůn: Very Good. My First Nursery Book This book is in very good condition and will be shipped within 24 hours of ordering. The cover may have some limited signs of wear but the pages are clean, intact and the spine remains undamaged. This book has clearly been well maintained and looked after thus far. Money back guarantee if you are not satisfied. See all our books here, order more than 1 book and get discounted shipping. Nļ de ref. del artŪculo: 7719-9781854378064

Descripciůn Tate Publishing, 2009. Hardback. Condiciůn: Very Good. The book has been read, but is in excellent condition. Pages are intact and not marred by notes or highlighting. The spine remains undamaged. Nļ de ref. del artŪculo: GOR004126055