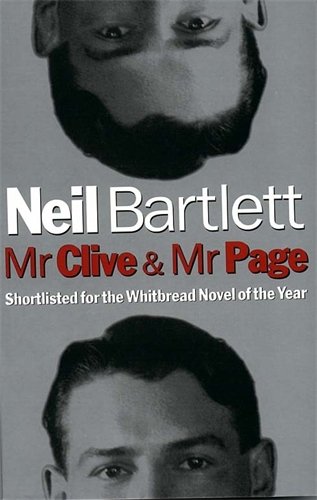 In 1886 an architect called Richardson built a house on the South side of Chicago. In 1985 the Daily Mirror reported the death of Rock Hudson. Halfway through the century that falls between these dates a man who claims his name is Mr Page sits down by his gas-fire on a snowbound Christmas Eve and sets himself the task of explaining a story that connects these apparently unconnected events. Neil Bartlett?s new novel spins a dark and erotic web of conjecture in the gaps of history. It takes its reader from the brittle glamour of the twenties into the violent repression of the fifties; from Mayfair dining rooms to the steam room of a gentlemen?s Turkish Bath; from the ordinary world of Mr Page into the strange and unsettling world of the black-haired, well-dressed and immensely wealthy Mr Clive.

A strange, yet perfectly poised tale of male sexual longing and violent fantasy, with a chilling whodunnit at its core (Mail on Sunday)

A curious and original novel that is compulsively readable (Observer)

Born in 1958, Neil Bartlett has spent twenty-five years at the cutting edge of British gay culture. His ground-breaking study of Oscar Wilde, Who Was That Man? paved the way for a queer re-imagining of history ; his first novel, Ready To Catch Him Should He Fall, was voted Capital Gay Book of The Year; his second, Mr Clive and Mr Page, was nominated for the Whitbread Prize. Both have since been translated into five European languages. Listing him as one of the country's fifty most significant gay cultural figures, the Independent said 'Brilliant,beautiful, mischievous; few men can match Bartlett for the breadth of his exploration of gay sensibility'. He also works as a director, and in 2000 was awarded an OBE for services to the theatre.