Artículos relacionados a BMW A CELEBRATION 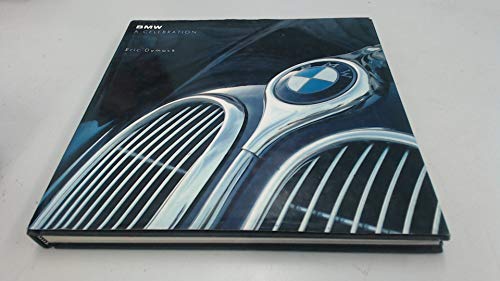 A history of the car manufacturer, BMW. The author's material ranges from original 1920s sales brochures to glamorous specially-commissioned photography. The photographs cover the development of BMW from the classic years of the 1930s to the modern era. The book was researched with the active help of BMW's own archivists and Eric Dymock chronicles the consequences for an industrial enterprise of two World Wars, giving a graphic account of BMW's recovery in the 1950s from the voluptuous saloons and the Isetta bubble car, to the memorable sports cars. Eric Dymock has also written "World Championship" and "The Guiness Guide to Grand Prix Racing".

Descripción Hardback. Condición: Good. The book has been read but remains in clean condition. All pages are intact and the cover is intact. Some minor wear to the spine. Nş de ref. del artículo: GOR003853974

Descripción TRAFALGAR SQUARE +. Hardcover. Condición: Good. A copy that has been read, but remains in clean condition. All pages are intact, and the cover is intact. The spine may show signs of wear. Pages can include limited notes and highlighting, and the copy can include previous owner inscriptions. At ThriftBooks, our motto is: Read More, Spend Less. Nş de ref. del artículo: G1851454241I3N00

Descripción Paperback. Condición: Very Good. The book has been read, but is in excellent condition. Pages are intact and not marred by notes or highlighting. The spine remains undamaged. Nş de ref. del artículo: GOR001362990

Descripción Pavilion Books 04/10/1990, 1990. Condición: Very Good. This book is in very good condition and will be shipped within 24 hours of ordering. The cover may have some limited signs of wear but the pages are clean, intact and the spine remains undamaged. This book has clearly been well maintained and looked after thus far. Money back guarantee if you are not satisfied. See all our books here, order more than 1 book and get discounted shipping. . Nş de ref. del artículo: 7719-9781851454242

Descripción Pavilion Books, 1990. Hardcover. Condición: Used; Good. **Simply Brit** Shipped with Premium postal service within 24 hours from the UK with impressive delivery time. We have dispatched from our book depository; items of good condition to over ten million satisfied customers worldwide. We are committed to providing you with reliable and efficient service at all times. Nş de ref. del artículo: 1165280