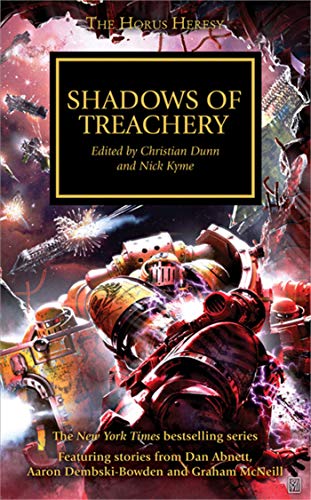 From the battlefields of Phall and Isstvan, to the haunted shadows of Terra itself: the greatest war in the history of mankind rages on. While the traitor legions continue their campaign of terror across the galaxy, preparations are made for the defence of the Imperial Palace and the final reckoning that must come.

Eric S. Brown is the author of World War of the Dead, Season of Rot, and Barren Earth. Some of his past works include Cobble, Madmen's Dreams, and Unabridged Unabashed and Undead: The Best of Eric S. Brown, among others. His short fiction has been published hundreds of times and he was featured as an expert on the walking dead in the book, Zombie CSU. Eric lives in NC with his loving wife, Shanna, and his son, Merrick. Nick Kyme is a writer and editor. He lives in Nottingham where he began a career at Games Workshop on White Dwarf magazine as a staff writer and journalist. Nick's writing credits include the Warhammer 40,000 Tome of Fire trilogy featuring the Salamanders, Fall of Damnos, the Space Marine Battles novel, his Warhammer Fantasy-based dwarf novels and several short stories. He has also penned several short stories for the New York Times bestselling Horus Heresy series.

shadows of treachery. edited by christian dunn and nick kyme (The Horus Heresy)

Descripción Condición: Good. A+ Customer service! Satisfaction Guaranteed! Book is in Used-Good condition. Pages and cover are clean and intact. Used items may not include supplementary materials such as CDs or access codes. May show signs of minor shelf wear and contain limited notes and highlighting. Nş de ref. del artículo: 1849703469-2-4

shadows of treachery. edited by christian dunn and nick kyme (The Horus Heresy)