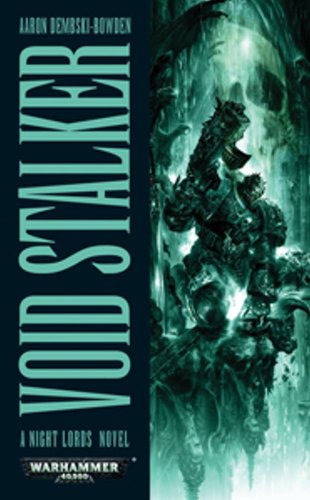 Talos and the rest of First Claw continue down their dark path, until it crosses that of the alien eldar - the Farseers of the Ulthwe craftworld divine a great threat posed by the Night Lords, and seek to bring the myriad skeins of fate back into alighment before their prophecy can be fulfilled.

Aaron Dembski-Bowden is a British author with his beginnings in the videogame and RPG industries. He's been a deeply entrenched fan of Warhammer 40,000 ever since he first ruined his copy of Space Crusade by painting the models with all the skill expected of an overexcited nine-year-old. He lives and works in Northern Ireland with his fiancee Katie, hiding from the world in the middle of nowhere. His hobbies generally revolve around reading anything within reach, and helping people spell his surname.

Descripción The Black Library, 2012. Paperback. Condición: Good. A few small marks to the page edges. Good reading copy. Good condition is defined as: a copy that has been read but remains in clean condition. All of the pages are intact and the cover is intact and the spine may show signs of wear. The book may have minor markings which are not specifically mentioned. Most items will be dispatched the same or the next working day. Nş de ref. del artículo: mon0016176594

Descripción Black Library, 2012. Paperback. Condición: Very Good. The book has been read, but is in excellent condition. Pages are intact and not marred by notes or highlighting. The spine remains undamaged. Nş de ref. del artículo: GOR004113857

Descripción Black Library, 2012. Paperback. Condición: Fair. A readable copy of the book which may include some defects such as highlighting and notes. Cover and pages may be creased and show discolouration. Nş de ref. del artículo: GOR006100289