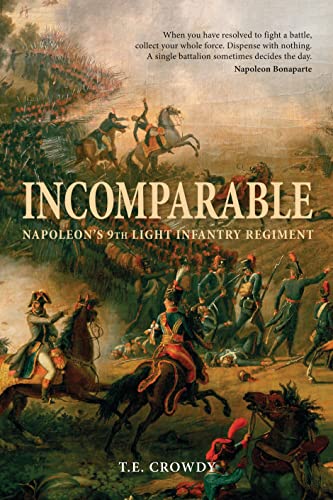 "Terry Crowdy's impressive Incomparable: Napoleon's 9th Light Regiment is a fabulous doorway to the goings on in the barracks of one of the French emperor's most highly regarded units. You meet the soldiers and the officers and follow them through their careers and service in Napoleon's army... Above all Incomparable is a terrific tale of the men who took French military power to the heights of conquering most of Europe... I found I become so involved in the men of the 9th that I had to really force myself to put it down. It is a mighty read and I didn't want to finish it." --Richard Moore, www.napoleonicguide.com "...a ripping yarn, very difficult to put down, obviously based on years of very deep research in various archives and collections, which have given the author a very intimate knowledge of the officer corps of the regiment and of its daily routines, operating procedures, strengths and weaknesses. Through the well-woven narrative the reader becomes close to several of the main characters of the regiment, as the progress of the 9th is charted through the subsequent campaigns of 1805, 1806 and 1807, then into Spain. ...fascinatingly readable history... I recommend it thoroughly." --Digby Smith, Napoleon Series forum "Full-color reproductions of paintings and uniform illustrations enhance this 416-page, hardcover book. Rather than a straightforward regimental history, this is a dramatic look inside the Napoleonic war machine. I highly recommend this remarkable true story of soldiers who got caught up in Napoleon's meteoric career as an empire was conquered and then lost." --Gage Bell, Toy Soldier & Model Figure (March 2013) "...documents an elite battalion under Louis XVI, the 9th Light Infantry, which was with Napoleon from the start of his campaign. Motivated by a deep fear of failure, this regiment was to perform unbelievable tasks and spent over a decade following Napoleon on all his campaigns, right up to the end. This story of soldiers who became part of this war machine offers insights on the lives and achievements of these men, and is a top pick for any military history holding." --James A. Cox, The Midwest Book Review (January 2013)

An elite battalion under Louis XVI, the 9th Light Infantry regiment were with Napoleon from almost the beginning, turning the field at Marengo and breaking the Austrians. They then spent over a decade fighting their way across the continent, following Napoleon to the bitter end. Bringing their Eagle out of hiding when Napoleon returned from exile in 1815 they almost saved the day again, at Waterloo, spearheading a charge to rejoin Napoleon. But unlike at Marengo, they failed. Napoleon dubbed them 'Incomparable', and their story is extraordinary even by the standards of the dramatic and turbulent years in which they lived.