Artículos relacionados a The Master Switch: The Rise and Fall of Information...

The Master Switch: The Rise and Fall of Information Empires

The Master Switch: The Rise and Fall of Information Empires 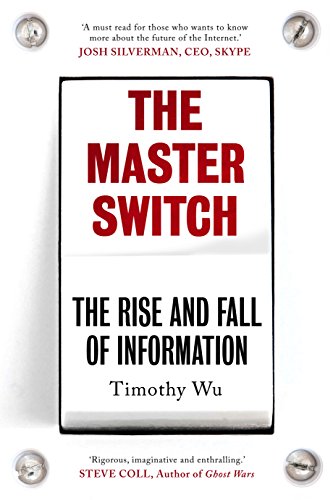 The Internet Age: on the face of it, an era of unprecedented freedom in both communication and culture. Yet in the past, each major new medium, from telephone to satellite television, has crested on a wave of similar idealistic optimism, before succumbing to the inevitable undertow of industrial consolidation. Every once free and open technology has, in time, become centralized and closed; as corporate power has taken control of the 'master switch.' Today a similar struggle looms over the Internet, and as it increasingly supersedes all other media the stakes have never been higher. Part industrial expose, part examination of freedom of expression, "The Master Switch" reveals a crucial drama - full of indelible characters - as it has played out over decades in the shadows of global communication. It is suitable for readers of Nicholas Carr's "The Shallows", Clay Shirky's "Cognitive Surplus" and "Googled" by Ken Auletta.

Timothy Wu is an author, a policy advocate, and a professor at Columbia University. A veteran of Silicon Valley, in 2006 he was recognized as one of fifty leaders in science and technology by Scientific American magazine. He won the Lowell Thomas gold medal for Travel Journalism, and has contributed to The New Yorker, The New York Times and Forbes. He is also a fellow of the New America Foundation and the chairman of the media reform organization Free Press. He lives in New York.

1. The Master Switch: The Rise and Fall of Information Empires

Descripción Atlantic Books, London, 2010. Softcover. Condición: Very Good. First Edition. Introduction by author, acknowledgements, notes and index. Plaintext paperback binding with red and black coloured titles to the front panel and white and black coloured titles to the backstrip black and white photograph of author to the verso of the front panel. In this book the author details how a once free and open technology the Internet has become " . centralised and closed, as corporate power has taken control of "the master switch". from the rear panel blurb. A little rubbing of the book edges and panels. Age toning of the text block edges and pages. Full Number Line. Size: Trade Paperback. [13], 4 - 366, [8] pages, Please refer to accompanying picture (s). Quantity Available: 1. Category: Communications & Media; Modern; Computers & Internet. ISBN: 1848879857. ISBN/EAN: 9781848879850. Inventory No: 0130402. Nş de ref. del artículo: 0130402