Artículos relacionados a Murders & Misdemeanours in The West End of London... 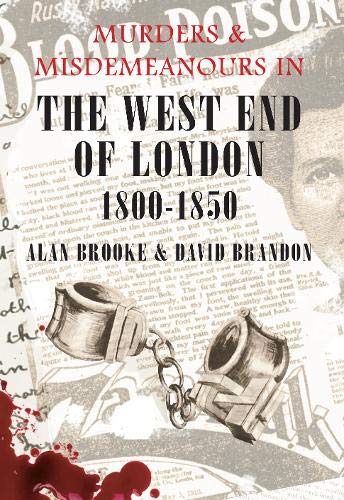 A look at the dark side of life, Victorian-style, when nothing was quite as it seemed and a public execution could be an entertaining family day out. Murderers, poachers, thieves, pickpockets and vagabonds all went about their business with impunity. Crime took place on the streets, on public transport, in homes, pubs, prisons, asylums, workhouses and brothels - it was all part of everyday life. Naturally the punishments awarded varied considerably, depending upon the crimes committed. Murderers and thieves - particularly horse thieves - could expect the rope, though others could hope for a reprieve. Such a remission would automatically add them to list of convicts to be deported to the penal colonies in Australia. Alternatively, convicts might expect to spend time in gaol or a House of Correction, with hard labour and floggings often thrown in for good measure. This collection of real life crimes vividly recreates the events surrounding them, offering an insight not only into criminal law but also into the social history attached to crime as society evolved and adapted to meet changing industries and class structures. A must have book for any arm chair detective and anyone interested in the social mores of the day.

David Brandon spent much of his working life in adult education in colleges and universities. He has a passion for history and is a published author. He runs a variety of courses and lectures on topics such as 'Absolute Rotters and Total Cads - Villains in British History'; and 'You Are What You Eat - Food and Eating Habits 1550-2000'. He has also co-written several successful titles with Alan Brooke. He lives in Peterborough. Alan Brooke has taught history in further and higher education for over 30 years. His enthusiasm and interest in history continues through writing, giving public talks, guided tours of London and part-time lecturing. He has written and co-written (with David Brandon) many books, many of which deal with London history.