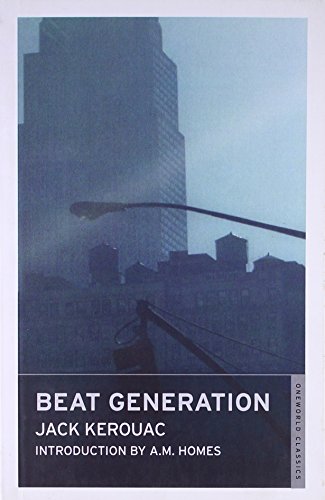 "Beat Generation" is a play about tension, about friendship, and about karma - what it is and how you get it. It begins one fine morning with a few friends, honest laborers some of them, some close to being down-and-out, passing around a bottle of wine. It ends with a kind of satori-like reaffirmation of the power of friendship, of doing good through not doing, and the intrinsic worth of the throw-away little exchanges that make up our lives. Written in 1957, the same year that "On the Road" was first published, and set in 1953, "Beat Generation" portrays an authentic and alternate 1950s America. Kerouac's characters are working-class men and women - a step away from vagrants, but not a big step. Their dialogue positively sings, suggesting jazz riffs in their rhythm and content, and Kerouac, like a master composer, arranges it to magical effect. Here is the heart and soul of the beat mentality, the zeitgeist that blossomed over the decades and eventually culminated in the counter-culture of 1960s America. It's a spirit that still lives.

Descripción Paperback. Condición: Very Good. The book has been read, but is in excellent condition. Pages are intact and not marred by notes or highlighting. The spine remains undamaged. Nş de ref. del artículo: GOR000998847

Descripción Paperback. Condición: Very Good. The book has been read, but is in excellent condition. Pages are intact and not marred by notes or highlighting. The spine remains undamaged. Nş de ref. del artículo: CIN000046188

Descripción Oneworld Classics Ltd, 2007. Paperback. Condición: Very Good. WE ARE PROCESSING ORDERS AS NORMAL DURING THIS VIRUS EPIDEMIC, ALL ITEMS ARE SENT BY ROYAL MAIL. DISPATCHED FROM THE UK WITHIN 24 HOURS ( BOOKS ORDERED OVER THE WEEKEND DISPATCHED ON MONDAY) BY ROYAL MAIL. ALL OVERSEAS ORDERS SENT BY AIR MAIL. WE ALSO ACCEPT PAYMENT IN US DOLLARS OR EURO BY BANK TRANSFER. Nş de ref. del artículo: mon0000555496