Artículos relacionados a The Farm 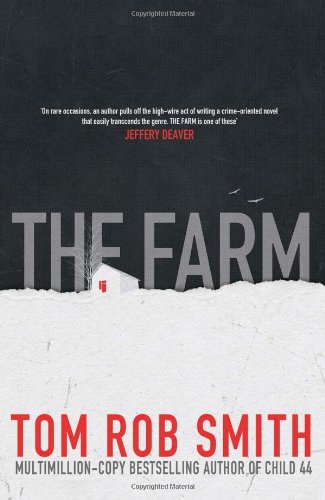 'On rare occasions, an author pulls off the high-wire act of writing a crime-oriented novel that easily transcends the genre. The Farm is one of these. In the vein of Høeg's Smilla's Sense of Snow and le Carré's A Perfect Spy, the tale brilliantly choreographs the collision of the present with the familial past. Author Smith takes a new direction here, but his skills are as finely honed as ever, with this tale that's both a page turner and a searing examination of the lives of our protagonist, his lover and his family. Structurally innovative and stylistically resonant, The Farm is a remarkable achievement' --Jeffery Deaver

'Chilling, hypnotic and thoroughly compelling. You will not read a better thriller this year' --Mark Billingham

'Tom Rob Smith has created a truly original and chilling thriller, which makes you ask yourself: who would I believe?' --Jojo Moyes

'This is a neatly plotted book full of stories within stories, which gradually unravel to confound our expectations...Smith's twisting, turning novel shows that Scandi crime also retains the ability to surprise and thrill' --Guardian

'A mind-blowing, addictive plot that will have you on the edge of your seat, tearing through the pages as the truth involving a missing teenage girl, Swedish folklore and some sinister neighbours slowly leaks out' --Stylist

'This is a tale of suspense as a man is torn between his mother and father, not knowing who to trust. Packed with conspiracies and secrets' --Woman & Home

'The Farm is tense, twisting and claustrophobic, and is everything you could want in a thriller'--The Bookseller

'Tom Rob Smith breathes new life into the landscape, transcending the traditional crime fiction genre with an intricately-knitted thriller steeped in mythology. In The Farm, Rob Smith demonstrates the same craftsmanship that saw his highly-acclaimed novel Child 44 claim the Galaxy Book Award for Best New Writer and long-listed for the Manbooker Prize, among its many plaudits. This latest offering is a tapestry of fairytales old and new; so unsettling and oppressive that it blurs the distinctions between sanity and madness, reality and fantasy, leaving the reader guessing until the bitter end' --Independent

'His mastery of suspense will make any reader's heart pound'Financial Times

'In a class with Le Carré'Suspense Magazine

'Tom Rob Smith stands out in having grasped the insidious nature of a system that tries to prescribe what people think...a gripping, complex read'The Times

'The Phrase 'Master Storyteller' simply cannot do him justice'Scotsman

'Tom Rob Smith is a name to watch' Independent

If you refuse to believe me, I will no longer consider you my son... Daniel believed that his parents were enjoying a peaceful retirement on a remote farm in Sweden, the country of his mother's birth. But with a single phone call, everything changes. Your mother... she's not well, his father tells him. She's been imagining things - terrible, terrible things.In fact, she has been committed to a mental hospital. Before Daniel can board a plane to Sweden, his mother calls: Everything that man has told you is a lie. I'm not mad... I need the police... Meet me at Heathrow. Daniel is immediately caught between his parents - whom to believe, whom to trust? He becomes his mother's unwilling judge and jury. Presented with a horrific crime, a conspiracy that implicates his own father, Daniel must examine the evidence and decide for himself: who is telling the truth? And he has secrets of his own that for too long he has kept hidden...