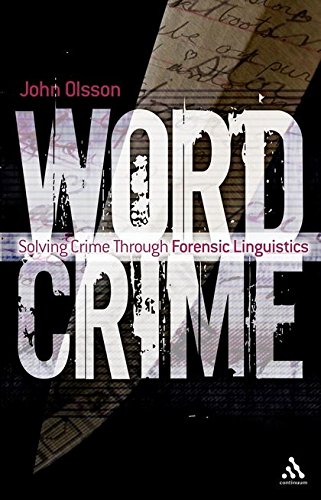 [Olsson provides] a quite readable and indeed insightful glimpse into the technical practicalities of the duties and tasks of a foreign linguist.--Springer (Int J Semiot Law) Olsson is an engaging storyteller--Literary Review "Literary Review " Olsson is an engaging storyteller--, "Literary Review " Once upon a time, the only way to tell that a suicide note had been faked was by matching its faded e's and crooked g's to the keys on the murderer's typewriter. Not any more. You might think that these days you could just text 'goodbye cruel world' to everyone in your victim's phone book before chucking their mobile off the balcony after them - a perfect crime, so long as you didn't forget to wear your rubber gloves. Except that John Olsson, 'the world's only full-time forensic linguist', could well, even then, be able to bust you. --Sanford Lakoff Olsson is an engaging storyteller--Sanford Lakoff "Literary Review " Anyone with the slightest interest in language will find this book fascinating.--Sanford Lakoff The name John Olsson may not be familiar to you, but his work as a forensic linguist has been crucial in putting murderers behind bars.--Sanford Lakoff John Olsson, 57, who lives in a secluded spot near Welshpool, Powys, is a world-leading expert in forensic linguistics. When author Lew Perdue claimed Dan Brown's The Da Vinci Code had been plagiarised from his own work Daughter of God, Mr Olsson was enlisted as an expert witness for the case. Mr Olsson said: "I studied both books and found 74 points in common between them, 68 of which were in sequence. I also found a common mistake in both; a parchment was incorrectly called a vellum. I could not find any other example of this mistake. "However I was blocked from giving evidence and the judge threw our case out, saying the similarities were purely generic." However, he has had more success in dealing with serious criminal cases - he is one of only three experts in forensic linguistics in the UK whom police call upon for help. His expertise is called upon when the authorship of a text message is in question. --Sanford Lakoff Wordcrime provides a fascinating insight into a rarely seen and still largely unknown science, and its many narratives describing how forensic linguistics is helping solve crime extend the book's appeal to a wider audience beyond law enforcement. The evidence is well presented and the explanations are easy to follow. The range of cases examined offer a real feel for the discipline's scope, application and usefulness as a crime detection technique. Investigators willing to understand and get to grips with the methods described in the book will find them extremely useful in their examination of suspected fraud involving documents, and any case where discovering the author of a particular document/email/text is an important part of its solution. --Sanford Lakoff What emerges most strikingly in this book is the creative aspect of language and the broad nature of the field of linguistics. --Sanford Lakoff

"Tell kids not to worry. sorting my life out. be in touch to get some things." Instead of being a text message from one partner to another, this text message turns out to be crucial and chilling evidence in convicting the deceptive killer of a mother of two. Sent from her phone, after her death, a few tell tale signs give him away to a forensic linguist. Rarely is a crime committed without there being some evidence in the form of language. The book includes the much-discussed dispute between the publishers of The Da Vinci Code and the author of Daughter of God where Dan Brown was accused of plagiarism and Olsson provided expert opinion. The case of Jenny Nicholl, so recently in the press, is also covered. There are a series of further chapters where gripping cases are described - involving murder, sexual assault, hate mail, suspicious death, code deciphering, arson and even genocide. Olsson describes the evidence he gave in each one. In approachable and clear prose, he details how forensic linguistics helps the law beat the criminals. This is fascinating reading for anyone interested in true crime, in modern, cutting-edge criminology and also where the study of language meets the law.