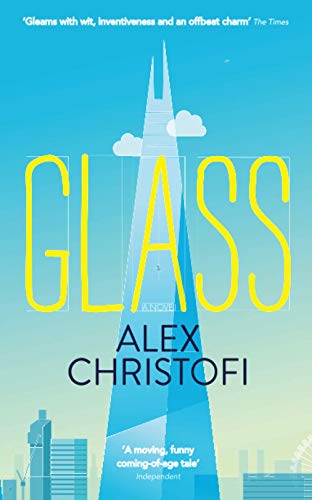 This first novel makes me want to use words like "sparkling", "sharp", "translucent" - not surprising, since it is about glass and one man's obsession with it ... Christofi's writing really does gleam with wit, inventiveness and an offbeat charm (Kate Saunders The Times 2015-02-07)

Christofi's debut novel is both charming and funny, and not a little affecting, too ... there's enough here to show you the author has plenty more to offer and that, like his hero, he definitely has his heart in the right place. (Daily Mail 2015-01-30)

By far the most fun I've had with a British debut novel since Ned Beauman's Boxer, Beetle ... The comedic, mock-picaresque approach should appeal to fans of Beauman, Joshua Ferris, Matthew Quick, or even the Channel 4 sitcom Friday Night Dinner ... With a first novel this good, great things are surely in store for Alex Christofi. I daresay you'll take Günter Glass to your heart and follow his misadventures with rapt amusement. (Rebecca Foster BookHugger 2015-03-02)

WINNER OF THE BETTY TRASK PRIZE 2016

Meet Günter Glass - ex-milkman and aspiring window-cleaner, struggling to find his way in the world

His mum has died, his dad's retired, he's just been let go from his milk round - and Günter Glass has his head in the clouds. Fortunately, he also has a head for heights, and a lifelong fascination with glass. So when the call comes to clean the windows of the tallest skyscraper in London, he sets off for the big city with little more than youthful enthusiasm, a dual-squeegee holster and his dear departed mother's homespun wisdom.

But will Günter's innocence put him on a collision course with the modern world? He's never had a girlfriend, and now he's falling for a clairvoyant with unclear intentions. Most of what he knows about
life comes from Wikipedia, so sharing a dingy flat with an eccentric German philosopher is a bit befuddling. And most worrying of all, he's starting to think his new boss may be a little unhinged ...

Glass is a novel about learning to wise up to the world around you. Charming, funny and slyly clever, it establishes Alex Christofi as one of Britain's most exciting young writers.