Artículos relacionados a The Misfortunates 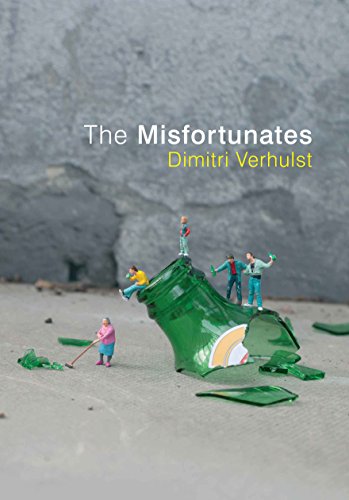 Sobriety and moderation are alien concepts to the men in Dimmy's family. Useless in all other respects, his three uncles have a rare talent for drinking, a flair for violence, and an unwavering commitment to the pub. And his father Pierre is no slouch either. Within hours of his son's birth, Pierre plucks him from the maternity ward, props him on his bike, and takes him on an introductory tour of the village bars. His mother soon leaves them to it and as Dimmy grows up amid the stench of stale beer, he seems destined to follow the path of his forebears and make a low-life career in inebriation, until he begins to piece together his own plan for the future...In this semi-autobiographical novel, Dimitri Verhulst brings his shambolic upbringing to life, with characteristic warmth, colour, and wit.

Born in Belgium in 1972, DIMITRI VERHULST is the author of a collection of short stories, a volume of poetry and several novels, including Problemski Hotel and Madame Verona Comes Down the Hill (Portobello, 2009), which have both been translated into English. His books have been widely translated and praised throughout Europe.

Descripción Portobello Books, 2012. Condición: Good. Ships from the UK. Former Library book. Shows some signs of wear, and may have some markings on the inside. Nş de ref. del artículo: GRP70338469

Descripción Portobello Books, 2012. Paperback. Condición: Very Good. The book has been read, but is in excellent condition. Pages are intact and not marred by notes or highlighting. The spine remains undamaged. Nş de ref. del artículo: GOR003246079

Descripción Portobello Books, 2012. Condición: Good. A+ Customer service! Satisfaction Guaranteed! Book is in Used-Good condition. Pages and cover are clean and intact. Used items may not include supplementary materials such as CDs or access codes. May show signs of minor shelf wear and contain limited notes and highlighting. Nş de ref. del artículo: 1846271584-2-4