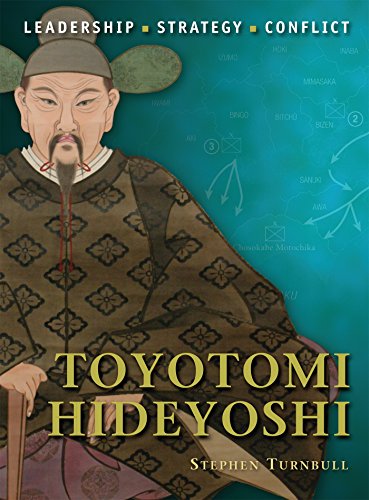 Arguably the greatest military commander in the history of the samurai, Toyotomi Hideyoshi rose from the ranks of the peasantry to rule over all Japan. A student of the great unifier Oda Nobunaga, Hideyoshi would later avenge the murder of his master at the battle of Yamazaki. After consolidating his position, Hideyoshi went on the offensive, conquering the southern island of Kyushu in 1587 and defeating the Hojo in 1590. By 1591, he had accomplished the reunification of Japan. This book looks at the complete story of Hideyoshi's military accomplishments, from his days as a tactical leader to his domination of the Japanese nation.

Stephen Turnbull took his first degree at Cambridge University, and has two MAs (in Theology and Military History) from Leeds University. In 1996 he received a PhD from Leeds for his work on Japanese religious history. He travels extensively in Europe and the Far East and also runs a well-used picture library. His work has been recognized by the awarding of the Canon Prize of the British Association for Japanese Studies and a Japan Festival Literary Award. In 2008 he was appointed Visiting Professor of Japanese Studies at Akita International University in Japan. Stephen Turnbull currently divides his time between lecturing in Japanese Religion and History at Leeds University and freelance writing. Giuseppe Rava was born in Faenza in 1963, and took an interest in all things military from an early age. Entirely self-taught, Giuseppe has established himself as a leading military history artist, and is inspired by the works of the great military artists, such as Detaille, Meissonier, Rochling, Lady Butler, Ottenfeld and Angus McBride. He lives and works in Italy.