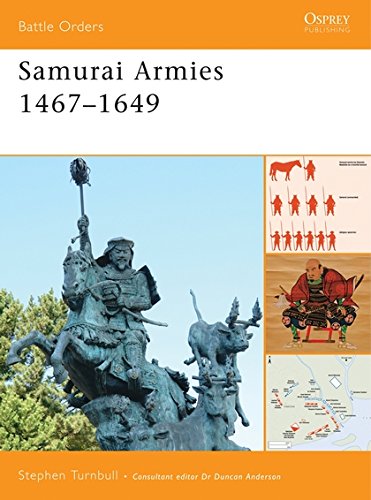 "The Sengku Jidai was the sage of the samurai in early Japan -- and Stephen Turnbull's discussion of the evolution and contributions of samurai armies to Japanese warfare makes for a detailed survey of not just army structure, but the family and clan ties that made it up. Military libraries strong in historic surveys as well as any collection strong in early Japanese history will find here a detailed winner." --California Bookwatch (March 2009)

The Sengoku The Jidai, 'Age of Warring States', is the age of the samurai the military aristocracy of Japan. This period, which lasted from the outbreak of the Onin War in 1467 to the establishment of the Tokugawa Shogunate in the early 17th century, was a period of endemic warfare, when a lack of central control led to constant struggles between the daimyo, 'great names', who sought to extend the influence of their families through political and military means. This title will examine the complicated nature of family and clan that governed so much of the initial organization of the armies, how this changed over the period and how battlefield tactics developed over a series of major encounters such as Nagashino and Sekigahara.

Descripción Bloomsbury, 2020. Paperback. Condición: NEW. 9781846033513 This listing is a new book, a title currently in-print which we order directly and immediately from the publisher. Print on Demand title, produced to the highest standard, and there would be a delay in dispatch of around 10 working days. For all enquiries, please contact Herb Tandree Philosophy Books directly - customer service is our primary goal. Nş de ref. del artículo: HTANDREE01010016