ArtŪculos relacionados a A Different Kind of Courage: Gretel's Story 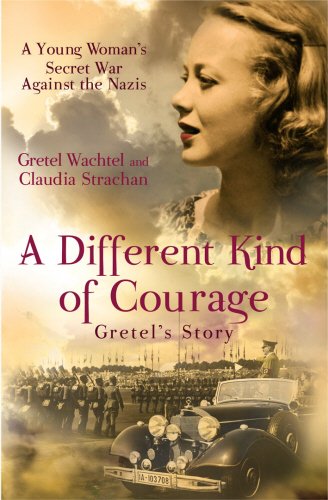 "A very well-written, fast-moving book . . . [it] has all the ingredients for a Hollywood blockbuster" (Tribune)

A Different Kind of Courage is the spellbinding account by an attractive and feisty young woman who witnessed personally Hitler's racist spite at the 1936 Berlin Olympics, and had to endure the shock of the disappearance of her best friend and her family during Kristallnact, the night of atrocities against the Jews. She allied herself to the German resistance fighters, passing on secrets learnt from her work on the Enigma decoding machines, and she received all the conflicting messages coming in on the day of the attempted assassination of Hitler in 1944 by Stauffenberg and his co-conspirators, many of whom she knew personally.

Gretel stayed in Hamburg throughout the war, suffering the constant bombing of the city by the Allies, helping the local Catholic priest to protect those being hunted by the SS, and was almost exposed by a 'house spy', when hiding her Jewish doctor in the coal cellar of her own house. Arrested finally by the Gestapo in 1945 and taken to an internment camp, she was liberated by the British Army.

When the Allies march towards Hamburg, the camp is dissolved and Gretel returns home. She falls in love with a handsome British officer, living life as best as she can in the ruins of Hamburg, until he asks her to come to England and marry him.

Destined to be a classic in the tradition of The Diary of Anne Frank, A Different Kind of Courage is a story of indomitable spirit and determination that will inspire and enthrall.