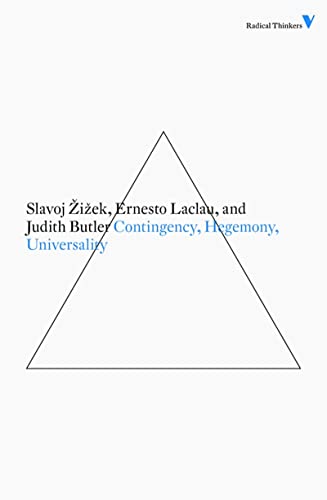 The Hegelian legacy, Left strategy, and post-structuralism versus Lacanian psychoanalysis.

Slavoj i[ek is a Slovenian philosopher and cultural critic. He is a professor at the European Graduate School, International Director of the Birkbeck Institute for the Humanities, Birkbeck College, University of London, and a senior researcher at the Institute of Sociology, University of Ljubljana, Slovenia. His books include "Living in the End Times," "First as Tragedy, Then as Farce," "In Defense of Lost Causes," four volumes of the Essential i[ek, and many more. Ernesto Laclau is Professor of Political Theory in the Department of Government, University of Essex, and Distinguished Professor for Humanities and Rhetorical Studies at Northwestern University. He is the author of, amongst other works, "Hegemony and Socialist Strategy" (with Chantal Mouffe), "New Reflections of the Revolution of Our Time," "The Populist Reason," "Contingency, Hegemony, Universality" (with Judith Butler and Slavoj Zizek), and "Emancipation(s)." Judith Butler is Maxine Elliot Professor in the Departments of Rhetoric and Comparative Literature at the University of California, Berkeley. She is the author of "Frames of War," "Precarious Life," "The Psychic Life of Power," "Excitable Speech," "Bodies that Matter," "Gender Trouble," and with Slavoj i[ek and Ernesto Laclau, "Contingency, Hegemony, Universality."

1. Contingency, Hegemony and Universality: Contemporary Dialogues on the Left (Paperback)