Artículos relacionados a In Defense of Lost Causes

In Defense of Lost Causes 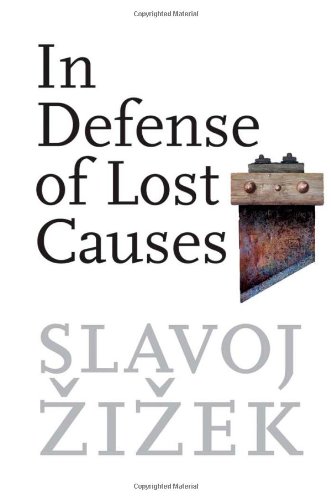 "Addictively eclectic - He contrives to leave the reader, as usual, both exhilarated and disoriented, standing in the middle of a scorched plain strewn with the rubble of smashed idols." Steven Poole, Guardian "A wealth of political and philosophical insight." Terry Eagleton, The Times Literary Supplement "A monument to imaginative, risk-taking and rigorous scholarship." Times Higher Education Supplement

Is global emancipation a lost cause? Are universal values outdated relics of an earlier age? In this combative major new work, philosophical sharpshooter Slavoj A iA ek takes on the reigning ideology with a plea that we should reappropriate several lost causes, and looks for the kernel of truth in the totalitarian politics of the past. Examining Heidegger's seduction by fascism and Foucault's flirtation with the Iranian Revolution, he suggests that these were the right steps in the wrong direction. Highlighting the revolutionary terror of Robespierre, Mao and the Bolsheviks, A iA ek argues that while these struggles ended in historic failure and monstrosity, this is not the entire story. There was, in fact, a redemptive moment that gets lost in the outright liberal-democratic rejection of revolutionary authoritarianism and the valorization of soft, consensual, decentralized politics. A iA ek claims that, particularly in the light of the forthcoming ecological crisis, we should reinvent revolutionary terror and the dictatorship of the proletariat in the struggle for universal emancipation. We need to courageously accept the return to this cause - even if we court the risk of a catastrophic disaster. In the words of Samuel Beckett: Try again. Fail again. Fail better.

1. In Defense of Lost Causes

2. In Defense of Lost Causes

3. In Defense of Lost Causes

4. In Defense of Lost Causes