Artículos relacionados a Field Guide to the Bird Songs and Calls of Britain... 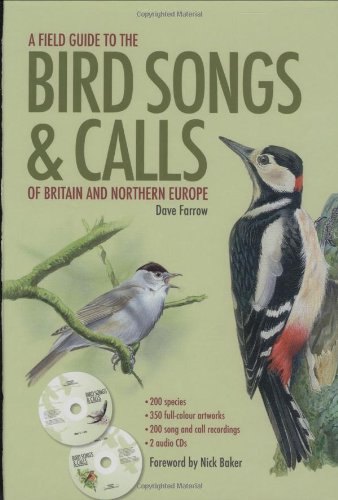 It has always been notoriously difficult to identify birds by their call or song and complicated and baffling sonograms don't give much help. Yet bird sounds are a critical aspect of accurate identification, with many species camouflaged, skulking or flying overhead against the sun making simple visual identification almost impossible at times. In woodland, for example, the majority of encounters with birds are by sound alone. Furthermore, some species are secretive by nature, and their call or song can be the only way of locating and accurately identifying them!This book is a major breakthrough in that it not only describes bird sound in a simple and understandable way, but also includes two accompanying bird song and call CDs, providing all the detail you need in order to confidently identify 200 different species over a wide variety of habitats.Each species is fully illustrated - showing details such as sexual variance and flight - by Brin Edwards, an award-winning artist with a distinctive and contemporary style. All birds are described with full identification detail and have examples of habitat and distribution as well as those all-important calls and song. Written with both beginners and the more experience birder in mind, this major new title really is the only field guide you will ever need.

Dave Farrow lives in Norwich, England, his adopted home after growing up on the outskirts of London. A keen birder from a very young age, at the age of six, he acquired the AA Readers' Digest book of Birds as a Christmas present, a book which displayed species distribution maps, and inspired him to travel. He made his first overseas birding trip at the age of seventeen, and to date has travelled in sixty-eight countries. Dave began his current career as a tour leader with the travel company Explore, before graduating to leading birding tours for Birdquest in the mid-'90s. He has led tours on all seven continents, although has a special love of the Far East. When he is not busy with tour work, he indulges his passion for sound-recording and has built up a collection of recordings from around the world, with a particularly large number from Asia.

1. A Field Guide to the Bird Songs & Calls of Britain and Northern Europe,

2. Field Guide to the Bird Songs and Calls of Britain and Northern Europe (Book & CD)

Descripción Hardback. Condición: Very Good. The book has been read, but is in excellent condition. Pages are intact and not marred by notes or highlighting. The spine remains undamaged. Nş de ref. del artículo: GOR001904884

3. Field Guide to the Bird Songs and Calls of Britain and Northern Europe (Book & CD)

Descripción Hardback. Condición: Good. The book has been read but remains in clean condition. All pages are intact and the cover is intact. Some minor wear to the spine. Nş de ref. del artículo: GOR005235661