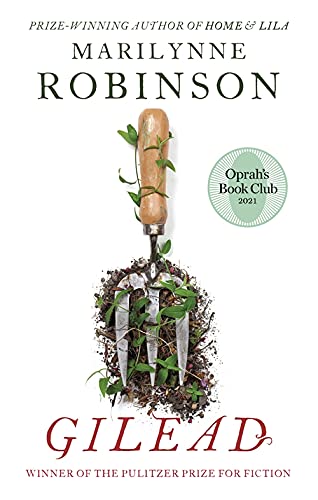 ...a country of mystical sunsets, abandoned shacks, storms that could have come out of the book of Job, snowstorms that that can take your life within a few feet of your own front door, and wild rivers in which one can be baptized. I said Marilynne Robinson's prose was like clear, cold water and so it is - and sometimes it is about water too - you are never far from its cleansing, chilly power, or from the mysterious rush of the wind, sounding like the ocean in a region impossibly far from any sea. (Peter Hitchens Mail Online)

Her poetic, almost biblical style of writing...flows like clear cold water and is full of quiet power while remaining oddly conversational... People say they love these books, and I can see why. Quite how they can do so without discerning within them a serious, deep, patient but modest defence of the Christian proposition, I do not know. (Peter Hitchens Mail Online)

Gilead is no less a masterpiece than Housekeeping (Sunday Times)

Stunning... there are gems on every page of Gilead, but it is the whole construction that marks it as a great work (Daily Telegraph)

The slow pulse of Robinson's writing slows the reader's eye and mind, and creates in the reading process a literary version of the narrator's spiritual experience. Gilead reminds us that words have power to spare, to forgive, to do justice (Independent)

A novel as big as a nation, as quiet as thought, and moving as prayer. Matchless and towering. (Kirkus Review)

In 1956, toward the end of Reverend John Ames's life, he begins a letter to his young son, a kind of last testament to his remarkable forebears.

'It is a book of such meditative calm, such spiritual intensity that is seems miraculous that her silence was only for 23 years; such measure of wisdom is the fruit of a lifetime. Robinson's prose, aligned with the sublime simplicity of the language of the bible, is nothing short of a benediction. You might not share its faith, but it is difficult not to be awed moved and ultimately humbled by the spiritual effulgence that lights up the novel from within' Neel Mukherjee, The Times

'Writing of this quality, with an authority as unforced as the perfect pitch in music, is rare and carries with it a sense almost of danger - that at any moment, it might all go wrong. In Gilead, however, nothing goes wrong' Jane Shilling, Sunday Telegraph

9. Gilead: Winner of the Pulitzer Prize for Fiction

10. Gilead: Winner of the Pulitzer Prize for Fiction

Descripción Paperback / softback. Condición: New. New copy - Usually dispatched within 3 working days. From the author of Housekeeping, Gilead is the long-hoped-for second novel by one of America's finest writers. Chosen by the New York Times Book Review as one of the top 6 novels of 2004. 'A beautiful novel: wise, tender and perfectly measured' Sarah Waters. Nş de ref. del artículo: B9781844081486