Artículos relacionados a The Breaking of Nations: Order and Chaos in the Twenty-first...

Cooper, Robert The Breaking of Nations: Order and Chaos in the Twenty-first Century

The Breaking of Nations: Order and Chaos in the Twenty-first Century 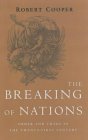 From 'the foremost commentator on the strategic issues of our age' (New Republic) comes an important - and already massively influential - argument that is required reading for anyone seeking to understand the world in which we now live.

Cooper argues that although Europeans may operate on the basis of laws, openness and cooperative security among themselves, but when dealing with a hostile outside world they need to revert to the tougher methods of an earlier era - force, pre-emptive attack and deception.

1. THE BREAKING OF NATIONS: ORDER A