Artículos relacionados a Stalin: The Court of the Red Tsar

Sebag Montefiore, Simon Stalin: The Court of the Red Tsar 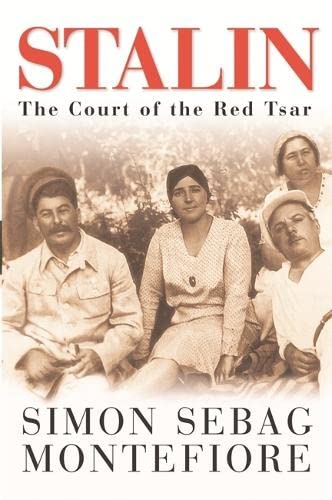 The publicity for this has been fantastic and it is still selling like a train, currently no. 6 on THE SUNDAY TIMES & no. 1 on EVENING STANDARD bestseller lists. The following pieces have run: an interview with Simon and his wife Santa in VOGUE (July issue); an article on Stalin's women in the SUNDAY TIMES News Review (29 June); a piece on Stalin's houses in the DAILY TELEGRAPH(8 July); a piece on his research in THE FINANCIAL TIMES (5 July); a book digest in THE DAILY MAIL (8 July) and an article in BBC HISTORY MAGAZINE (August issue). The TV programme, STALIN: THE TERROR, which Simon was the historical consultant on was shown on BBC 2 25 July. The reviews have been amazing: 'This is an extraordinary book..... he has succeeded in bringing alive a group of characters who for too long have seemed too dull to merit much historical investigation, and provided a glimpse of what life was really like behind theKremlin walls.... for anyone fascinated by the nature of evil - and by the effects of absolute power on human relationships - this book will provide new insights on every page.'Anne Applebaum, THE EVENING STANDARD 'Montefiore's new material is important, because it allows for a far more rounded portrait ofStalin....... Montefiore provides rich detail of daily life and family relationships in a world of human values turned inside out.'Antony Beevor, THE SUNDAY TIMES 'his masterful and terrifying account of Stalin.... seldom has the picture been put in finer focus than by Sebag Montefiore. It is partly through his diligent interviews with the children of survivors and his admirable combination of history and gossip that one sees the awful banality, the brutal crudity of the men who carelessly sent so many millions to their senseless deaths'Alistair Horne, THE TIMES 'Grimly brilliant'Andrew Marr, THE DAILY TELEGRAPH 'This is a thoughtful book of first-class scholarship as well as transfixing narrative of a vast nation walking head-first into a meat-grinder........ anyone reading this book will feel profound gratitude to Montefiore for a fascinating investigative analysis of the pathology behind the greatest and most senseless sustained blood-letting in world history.'Andrew Roberts, THE DAILY TELEGRAPH 'this grim masterpiece'Antonia Fraser, THE MAIL ON SUNDAY 'Its extraordinary revelation of the evil - the complete amorality - at the heart of the dictator's court will change the way historians approach the great historical questoins about the Stalinist regime.Orlando Figes, THE SUNDAY TELEGRAPH 'Montefiore's superb book'Tim Abrahams, THE SUNDAY HERALD 'spectacular..... an impressive and compelling work'Philip Mansel, THE SPECTATOR 'Magisterial.... Sebag Montefiore's book is well-written; he evidently has a superb grasp of Russia'Lesley Chamberlain, THE INDEPENDENT 'Thanks to Simon Sebag Montefiore, there is no longer the slightest justification for thinking of Joseph Stalin as anything other than a moster'Roy Hattersley, THE OBSERVER 'Gripping and timely.... This is one of the few recent books on Stalinism that will be read in years to come.'Robert Service, THE GUARDIAN 'A riveting portrait of the man and his ruling circle.'Marc Lambert, THE SCOTSMAN 'An astonishingly good and important book.'Simon Heffer, COUNTRY LIFE 'this magnificent portrait of the dictator'Richard Overy, LIT REVIEW Simon was on THE TODAY PROGRAMME (BBC Radio 4) on 8 July, THE THE ARTS SHOW (BBC Radio Scotland) on 11 July, SUNDAY PROGRAMME (GMTV) on 13 July, THE MORNING SHOW (BBC Radio 5 Live) on 18 July, together with BBC RADIO BRISTOL and BBC RADIO LEICESTER. On Saturday 19 July he was on LOOSE ENDS (BBC Radio 4) on 23 July BBC BREAKFAST NEWS (BBC 1),27 July BREAKFAST WITH FROST (BBC 1) and their were lots of previews for theBBC programme. We had a great launch party on 8 July with numerous diary stories. Simon has done a number of excellent events and sti

Stalin : The Court of the Red Tsar

Stalin : The Court of the Red Tsar Sebag-Montefiore, Simon

Stalin : The Court of the Red Tsar