Artículos relacionados a Voice Of The Gods: Book 3 of the Age of the Five

Canavan, Trudi Voice Of The Gods: Book 3 of the Age of the Five

Voice Of The Gods: Book 3 of the Age of the Five 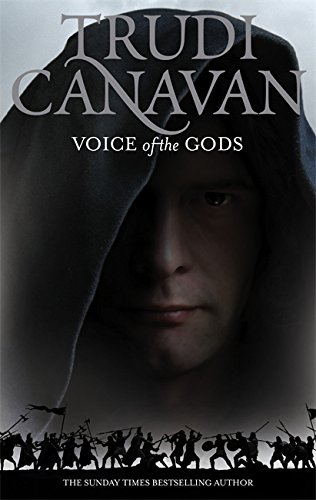 In her new role as protector of the Siyee, Auraya investigates sightings of a landwalker stranger in their land. She meets a mysterious woman claiming to be a friend of Mirar's: a woman who makes an offer Auraya is unable to refuse, but which she must conceal or risk the wrath of the gods.
In the south, Mirar enjoys acceptance and respect as he reclaims his place among his people, but that freedom will come at a cost. Meanwhile, Emerahl is at last able to join the Thinkers in their search for the Scroll of the Gods, but the truth may not be revealed in the form she expects. And the Pentadrians, frustrated by their defeat at the hands of the Circlians, plot and scheme to bring down their enemies by means other than direct conflict.
As the promise of peace dies, and two peoples are once more drawn inexorably into war, Auraya is unable to avoid being caught up the conflict. The key to everything, though, may lie with the Wilds, who embark upon a quest for secrets buried long ago.
Secrets that could change the world.

Trudi Canavan lives in Melbourne, Australia. Her first published story received an Aurealis Award for Best Fantasy Short Story in 1999. She has since published the bestselling Black Magician Trilogy and is now a bestselling author in the UK, Australia and the US.

1. Voice of the Gods

Descripción Orbit, 2006. Hardcover. Condición: Good. hardcover. Ships from the UK. Former Library book. Shows some signs of wear, and may have some markings on the inside. Nş de ref. del artículo: GRP9819272

2. Voice of the Gods

Descripción Orbit, 2006. Hardcover. Condición: Good. hardcover. Ships from the UK. Shows some signs of wear, and may have some markings on the inside. Nş de ref. del artículo: 18620665-20

Descripción Orbit, 2007. Hardcover. Condición: Good. Estado de la sobrecubierta: Includes dust jacket. Slight shelfwear to the dust jacket. Tan to the page edges. Good condition is defined as: a copy that has been read but remains in clean condition. All of the pages are intact and the cover is intact and the spine may show signs of wear. The book may have minor markings which are not specifically mentioned. Most items will be dispatched the same or the next working day. Nş de ref. del artículo: mon0014959241

Descripción Orbit 05/07/2007, 2007. Hardcover. Condición: Very Good. hardcover. This book is in very good condition and will be shipped within 24 hours of ordering. The cover may have some limited signs of wear but the pages are clean, intact and the spine remains undamaged. This book has clearly been well maintained and looked after thus far. Money back guarantee if you are not satisfied. See all our books here, order more than 1 book and get discounted shipping. . Nş de ref. del artículo: 7719-9781841493886

Descripción Orbit, 2007. Hardcover. Condición: Used; Good. hardcover. Wear and Tear to cover. stains on the side. . . **SHIPPED FROM UK** We believe you will be completely satisfied with our quick and reliable service. All orders are dispatched as swiftly as possible! Buy with confidence!. Nş de ref. del artículo: 3913629

7. VOICE OF THE GODS

Descripción ORBIT, 2007. Hardcover. Condición: Used; Good. hardcover. **Simply Brit** Shipped with Premium postal service within 24 hours from the UK with impressive delivery time. We have dispatched from our book depository; items of good condition to over ten million satisfied customers worldwide. We are committed to providing you with reliable and efficient service at all times. Nş de ref. del artículo: 1004227

Descripción Orbit, 2006. Hardback. Condición: Good. hardcover. The book has been read but remains in clean condition. All pages are intact and the cover is intact. Some minor wear to the spine. Nş de ref. del artículo: GOR001217449

9. Voice Of The Gods: Book 3 of the Age of the Five [Hardcover] Canavan, Trudi

Descripción Orbit 05/07/2007, 2007. Hardcover. Condición: Very Good. hardcover. Shipped within 24 hours from our UK warehouse. Clean, undamaged book with no damage to pages and minimal wear to the cover. Spine still tight, in very good condition. Remember if you are not happy, you are covered by our 100% money back guarantee. Nş de ref. del artículo: 6545-9781841493886