ArtÝculos relacionados a Crossroads Of Twilight: Book 10 of the Wheel of Time:...

Jordan, Robert Crossroads Of Twilight: Book 10 of the Wheel of Time: 10/11 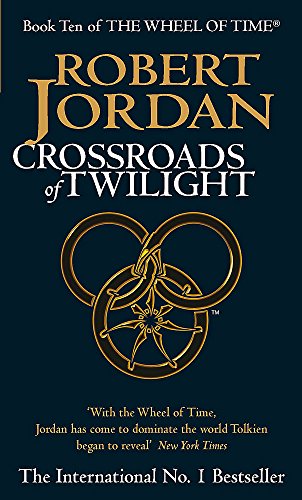 Epic in every sense (SUNDAY TIMES)

A powerful vision of good and evil (ORSON SCOTT CARD)

Robert Jordan's epic fantasy saga The Wheel of Time is now firmly established as a classic of the genre and a world-wide bestseller. Now the series continues with the eagerly-awaited tenth volume ...

Rand al'Thor, the Dragon Reborn, must fight on against the Dark One in a struggle that has drawn an entire world into its vortex - claiming the souls of friends and enemies alike.

He has cleansed the taint of madness from the male half of the True Source, so may now draw on its power as a weapon of awesome potential. This could tip the balance in a perilous battle against evil as Rand must gamble with himself at stake. He cannot be sure which of his allies are really enemies - even among lifelong companions.