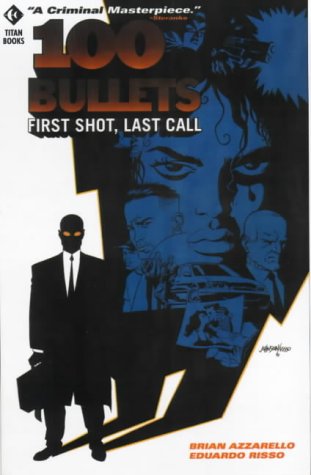 An All-New Series In The Bloodsoaked Tradition Of Preacher! It's happened to all of us at one time or another. Somebody, somewhere, did something so bad, so wrong, you wanted to kill them...even if it were only for a split second. So here's the question: what would you do if you were given the opportunity and means to get away with it, scot-free? 100 Bullets follows what happens when people from all walks of life meet Agent Graves, a mysterious figure who offers his 'clients' the opportunity of a lifetime: an attache case containing the proof, the gun and the carte blanche immunity to exact revenge on the person who's done them irrevocable wrong. So, would you pull the trigger?

Brian Azzarello is a relative newcomer to the comics scene, but his work on 100 Bullets and Jonny Double has catapulted him to the forefront of the ranks of contemporary comics writers.

Descripción Paperback. Condición: Very Good. The book has been read, but is in excellent condition. Pages are intact and not marred by notes or highlighting. The spine remains undamaged. Nş de ref. del artículo: GOR001645801

Descripción Titan Books Ltd, 2001. Paperback. Condición: Used; Good. **Simply Brit** Shipped with Premium postal service within 24 hours from the UK with impressive delivery time. We have dispatched from our book depository; items of good condition to over ten million satisfied customers worldwide. We are committed to providing you with reliable and efficient service at all times. Nş de ref. del artículo: 1232875

Descripción Titan Books Ltd, 2001. Paperback. Condición: Used; Good. stains on the side **SHIPPED FROM UK** We believe you will be completely satisfied with our quick and reliable service. All orders are dispatched as swiftly as possible! Buy with confidence! Aloysius Ihezie. Nş de ref. del artículo: 3815030

Descripción Titan Books Ltd, 2001. Paperback. Condición: Very Good. WE ARE PROCESSING ORDERS AS NORMAL DURING THIS VIRUS EPIDEMIC, ALL ITEMS ARE SENT BY ROYAL MAIL. DISPATCHED FROM THE UK WITHIN 24 HOURS ( BOOKS ORDERED OVER THE WEEKEND DISPATCHED ON MONDAY) BY ROYAL MAIL. ALL OVERSEAS ORDERS SENT BY AIR MAIL. WE ALSO ACCEPT PAYMENT IN US DOLLARS OR EURO BY BANK TRANSFER. Nş de ref. del artículo: mon0000545294