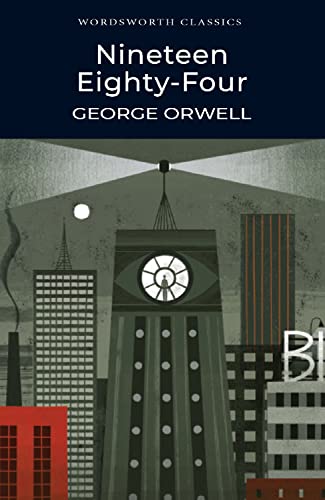 Descripción Paperback. Condición: New. Language: English. Brand new Book. The Thought Police, Doublethink, Newspeak, Big Brother - 1984 itself: these terms and concepts have moved from the world of fiction into our everyday lives. They are central to our thinking about freedom and its suppression; yet they were newly created by George Orwell in 1949 as he conjured his dystopian vision of a world where totalitarian power is absolute. In this novel, continuously popular since its first publication, readers can explore the dark and extraordinary world he brought so fully to life. The principal characters who lead us through that world are ordinary human beings like ourselves: Winston Smith and Julia, whose falling in love is also an act of rebellion against the Party. Opposing them are the massed powers of the state, which watches its citizens on all sides through technology now only too familiar to us. No-one is free from surveillance; the past is constantly altered, so that there is no truth except the most recent version; and Big Brother, both loved and feared, controls all. Even the simple act of keeping a diary - as Winston does - is punishable by death. In Winston's battle to keep his freedom of thought, he has a powerful adversary in O'Brien, who uses fear and pain to enter his very thought processes. Does 2+2 = 4? Or is it 5? We find out in Room 101.Nineteen Eighty-Four was Orwell's last novel; but the world he created is always with us, as successive generations of readers find within it a mirror for their own times and a warning for the future. Our edition also includes the following selection of Orwell's essays, column extracts and broadcasts: A Hanging; Spilling the Spanish Beans; Reviews of Jack London, The Iron Heel; H. G. Wells, When the Sleeper Awakes; Aldous Huxley, Brave New World; Ernest Bramah, The Secret of the League ; England Your England; Looking Back on the Spanish War; Arthur Koestler; The Prevention of Literature; Politics and the English Language; Why I Write; Politics Vs Literature; Sir Walter Raleigh; The Three Super-States of the Future; Persecution of Writers in USSR; Literature and Totalitarianism; Imaginary Interview: George Orwell and Jonathan Swift. Nş de ref. del artículo: AAZ9781840228021

Descripción Paperback. Condición: new. Paperback. The Thought Police, Doublethink, Newspeak, Big Brother - '1984' itself: these terms have moved from the world of fiction into our everyday lives. They are central to our thinking about freedom and its suppression; yet they were created by George Orwell in 1949 as he conjured his dystopian vision of a world where totalitarian power is absolute. Shipping may be from multiple locations in the US or from the UK, depending on stock availability. Nş de ref. del artículo: 9781840228021