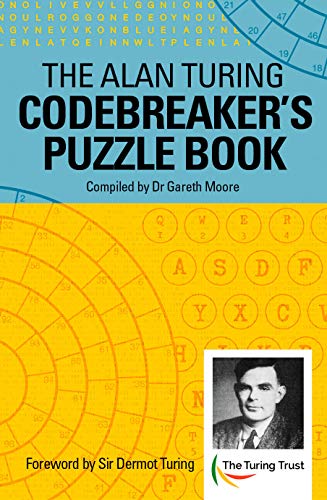 Alan Turing is often called the father of modern computing. During the Second World War, he worked at Bletchley Park, where top secret work was carried out to decipher the military codes used by Germany and her allies. Turing played a pivotal role in cracking intercepted coded messages, so enabling the Allies to defeat the Nazis in many crucial engagements, and his work was vital in helping the Allies win the war. Published in association with The Turing Trust, this incredible collection of puzzles allows you to test your own codebreaking skills - if you can solve every puzzle in the book you might once have been recruited to join the ranks of Alan Turing's codebreakers! It contains a breathtaking range of different types of puzzles, and so presents a wonderfully entertaining challenge for any puzzle lover.

Dr. Gareth Moore is the author of over 75 books of puzzles for both children and adults, and the creator of the daily brain-training site, BrainedUp.com. He creates all types of puzzle, ranging from crosswords and other word puzzles through to sudoku and logic puzzles. He is a board member of both the World Puzzle Federation and the UK Puzzle Association.

Descripción Arcturus Publishing Ltd, United Kingdom, 2017. Paperback. Condición: New. Language: English. Brand new Book. Check out your enigma-solving skills and see if you have the ability to become a master codebreaker! Alan Turing is known as the father of modern computing, recognised for his incredible intelligence work at Bletchley Park during World War II where he cracked the Enigma cipher. Published in association with The Turing Trust, this collection of 240 challenging and innovative codebreaking puzzles has been specially created to test your all-round codebreaking skills. As you work through the book, you will find the puzzles become progressively harder until you face the final mind-bending Enigma ciphers. A handy hint section is included as well as solutions in the back, which will lead you step-by-step through the logic of each puzzle. This book includes a foreword written by Sir Dermot Turing - Alan Turing's nephew and trustee of The Turing Trust. Set up in Alan Turing's memory, this charity provides communities in rural Africa with computers and computer learning resources. This book supports the running of the trust. Nş de ref. del artículo: FOY9781788281911