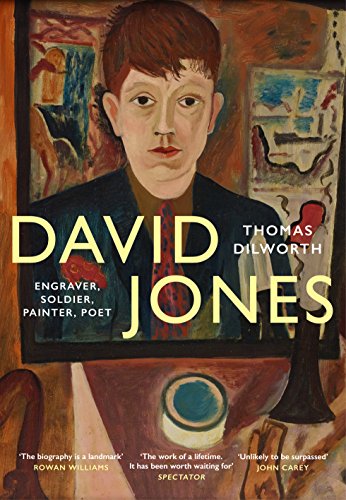 "A gorgeous addition to the growing interest in David Jones, lavishly illustrated with his dreamy engravings and watercolours... Dilworth’s meticulous, richly detailed biography is the perfect introduction to a notoriously difficult poet and a painter with a lightness of touch to stand beside Marc Chagall and Raoul Dufy." (Claire Lowdon Sunday Times, 2017 Books of the Year)

"Pretty well the perfect biography. It does justice to an artist who has been quite unaccountably overlooked by posterity; perhaps being a genius in several modes – painting, engraving, poetry – confuses critics... A wonderful life." (Melanie McDonagh Evening Standard, Books of the Year)

"It is lavishly illustrated and wonderfully well written." (Observer, 2017 Books of the Year)

"Thomas Dilworth, the leading scholar of Jones’s work, has already devoted several books to re-establishing his genius. Now, David Jones: Engraver, Soldier, Painter, Poet – a biography 30 years in the making – offers the fullest portrait we are ever likely to have. Thanks to Dilworth’s fastidious attention to detail (a quality he shares with his subject), it is an enormously absorbing read, full of the curious life of the imagination and the colour-tinting of anecdote." (Jeremy Noel-Tod Daily Telegraph)

"This biography is a landmark. It would be good if it stirred an interest not only in Jones as an artist and poet, but in the questions he faced about modernity: what happens to art in a culture where each thing is no more than itself, or its market price?" (Rowan Williams New Statesman)

The first full biography of a neglected genius and one of the great Modernists, lavishly illustrated in colour throughout

As a poet, visual artist and essayist, David Jones is one of the great Modernists. The variety of his gifts reminds us of Blake – though he is a better poet and a greater all-round artist. Jones was an extraordinary engraver, painter and creator of painted inscriptions, but he also belongs in the first rank of twentieth-century poets.

Though he was admired by some of the finest cultural figures of the twentieth century, David Jones is not known or celebrated in the way that Eliot, Beckett or Joyce have been. His work was occasionally as difficult as theirs, but it is just as rewarding – and more various. He is overlooked because his best writing is imbedded in two book-length prose-poems – In Parenthesis and The Anathemata, making it difficult to anthologise; the work is informed by his Catholic faith and so may feel unfashionable in this secular age; he was a shy, reclusive man, psychologically damaged by his time in the trenches, and loathed any kind of self-promotion. Mostly, though, he was a complete and original poet-artist – sui generis, impossible to pigeon-hole – and that has led to the neglect of David Jones: a true genius and the great lost Modernist.