Artículos relacionados a The Global Minotaur: America, Europe and the Future...

Varoufakis, Yanis The Global Minotaur: America, Europe and the Future of the Global Economy (Economic Controversies)

The Global Minotaur: America, Europe and the Future of the Global Economy (Economic Controversies) 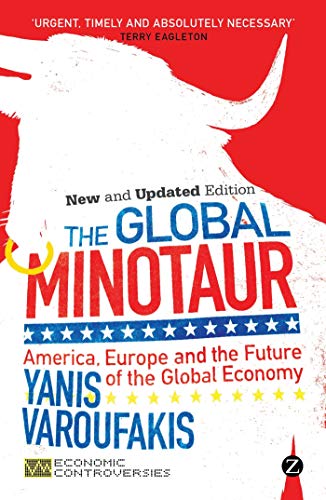 'The emerging rock-star of Europe's anti-austerity uprising' Daily Telegraph 'His argument has an ambitious sweep.' The Times 'This trenchant and readable critique sets the eurozone crisis within a much longer context.' London Evening Standard 'A spirited book.' New Yorker 'The book is one of those exceedingly rare publications of which one can say they are urgent, timely and absolutely necessary.' Terry Eagleton 'Yanis Varoufakis is a rare economist: skilled at explaining ideas, happy to join in public debates and able to put his discipline in a broader context.' Aditya Chakrabortty, Guardian lead economics writer 'Yanis is one of the best, brightest and most innovative economists on the planet.' Steve Keen, author of Debunking Economics 'Clearly and strongly written, with logical organization building towards simple conclusions, the book is an easy yet rewarding read ... perhaps should become the standard way we think about the nature of our increasingly dysfunctional world economy.' Joel Campbell, International Affairs 'In the most comprehensive guide to the contemporary economic crisis yet written, Yanis Varoufakis traces out the path from post-war US economic supremacy to the current predicament.' Gary Dymski, University of California, Riverside 'If you want to know how serious the current crisis is, you should read this book. With much eloquence, Yanis Varoufakis argues that the current financial problems are connected to the emerging fault lines of the international monetary system.' Shaun Hargreaves-Heap, University of East Anglia

In this remarkable and provocative book, Greek Finance Minister Yanis Varoufakis explodes the myth that financialisation, ineffectual regulation of banks, greed and globalisation were the root causes of both the Eurozone crisis and the global economic crisis. Rather, they are symptoms of a much deeper malaise which can be traced all the way back to the Great Crash of 1929, then on through to the 1970s: the time when a 'Global Minotaur' was born. Just as the Athenians maintained a steady flow of tributes to the Cretan beast, so Europe and the rest of the world began sending incredible amounts of capital to America and Wall Street. Thus, the Global Minotaur became the 'engine' that pulled the world economy from the early 1980s through to the financial collapse of 2008. Today's deepening crisis in Europe is just one of the inevitable symptoms of the weakening Minotaur; of a global 'system' which is now as unsustainable as it is imbalanced. Going beyond this, Varoufakis lays out the options available to us for reintroducing a modicum of reason into a highly irrational global economic order. An essential account of the socio-economic events and hidden histories that have shaped the world as we now know it.

1. The Global Minotaur: America, Europe and the Future of the Global Economy (Economic Controversies)

2. The Global Minotaur: America, Europe and the Future of the Global Economy (Economic Controversies)

3. The Global Minotaur: America, Europe and the Future of the Global Economy (Economic Controversies)