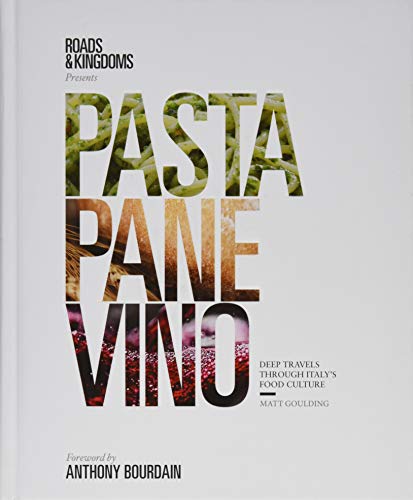 Following the acclaimed Rice, Noodle, Fish and Grape, Olive, Pig, comes Pasta, Pane, Vino: a beautifully photographed food-lover's travelogue through Italy, from the James Beard Award-winning author Matt Goulding and his popular website Roads & Kingdoms. The book celebrates the breadth and beauty of Italian food, culture, and history - part detailed user's guide, part moving love letter to a country where eating is an art. A blend of intimate narrative and insider knowledge, Pasta, Pane, Vino is a unique culinary journey through Italy's key regions. It introduces the chefs, shepherds, fisherman, farmers, grandmas and others who power Italy's revered culinary traditions. From the pasta temples of Rome to the pizza palaces of Naples to the truffle-strewn forests of the Piedmont, Pasta, Pane, Vino captures the breathtaking diversity of Italian regional food culture. Illustrated with nearly 200 lush colour photographs, this food-obsessed guide reveals Italy as never before-an odyssey that will rouse your appetite and imagination in equal measure.

Matt Goulding is a cofounder of the digital media company Roads & Kingdoms (named the 2017 publication of the year by the James Beard Foundation, and working with partners such as CNN and Anthony Bourdain to expand the definition of food and travel journalism) and the coauthor of the New York Times bestselling series series Eat This, Not That!, which has sold nearly 9 million copies worldwide. He divides his time between the tapas bars of Barcelona and the barbecue joints of North Carolina.

Descripción Hardie Grant Books. HC. Condición: New. He journeys through Italy, navigating its quirks and culture, its cuisines and fascinations. He tells of the people who bring the culinary traditions to the table, from the chefs of the great Roman pasta restaurants to the fishermen who supply the trattorias of Lake Como. In doing so he provides a celebration of the regional food culture of the country. Nş de ref. del artículo: 9781743795156

Descripción 2018. Hardcover. Condición: New. Hardcover. Pasta Pane Vino is is an illustrated food-lover's tour through the cuisine and culture of Italy. It celebrates the breadth and beauty of Italian food, culture, and history, presenting a ca.Shipping may be from multiple locations in the US or from the UK, depending on stock availability. 368 pages. 1.024. Nş de ref. del artículo: 9781743795156