Artículos relacionados a Jesuit Words: A Collection of Superior Words 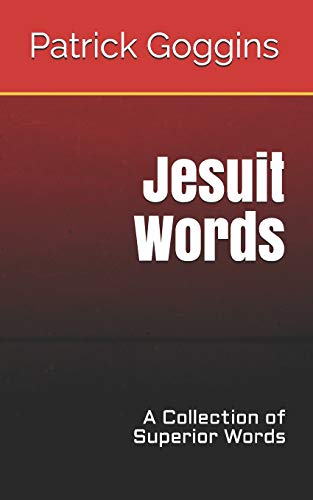 Descripción Independently Published, United States, 2018. Paperback. Condición: New. Language: English. Brand new Book. The Society of Jesus was founded by Ignatius of Loyola in 1534, "for the greater glory of God." Since then, their mission has been deeply involved in education, both for themselves and for their students. It is no surprise to learn that a Jesuit may have multiple post-graduate degrees, speaks several languages, and is reasonably well read and well spoken in most academic disciplines. And a Jesuit is now the Bishop of Rome. Pope Francis took his name from Francis of Assisi, and has begun his pontificate in the humble manner of his namesake. People hope for great things from Pope Francis, only time will tell if those hopes will be realized. Words are the basic elements of any culture. The English language is rich in words from many sources: Greek, Latin, modern languages, as well as words from literature, popular culture, business, and technology. The Oxford English Dictionary has full entries for 171,476 words in current use, and 47,156 obsolete words. The average American has a vocabulary of between 20,000 and 35,000 words - roughly ten percent of the language. The size of a your vocabulary increases as you read. Knowing words is good. Knowing how to use words is better. This book contains a list of 2,300 "Jesuit Words," or, words that the average person does not necessarily have in their working vocabulary, but nonetheless are worth knowing. And remember, knowing a word is different than knowing how to use it. Read these words for fun, and your vocabulary will increase. Use them properly, either in your writing or in your speech, and your erudition will shine for all to see. But, like a Jesuit, use them humbly. There's nothing worse than a lexiphanes who uses big words pridefully. Nş de ref. del artículo: APC9781719844994