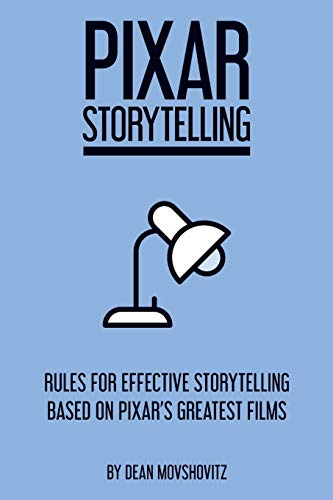 “The book is a fun, useful read. At just 122 pages, you can digest the whole thing in a weekend and be ready on Monday to bring some new life to your latest script. One of the benefits of examining script techniques through a specific set of films is that the lessons all become immediately applicable. Dean has an example for virtually every point he makes, so if you’ve seen even half of Pixar’s movies, you’ll be able to get the most possible out of this book.”

“The last one on this list is undoubtedly Pixar Storytelling which gives you an effective set of rules for excellent storytelling based on Pixar’s greatest films. This book is divided into 10 chapters that give the aspiring author insight into the common core of Pixar’s works—story ideas, creation of a conflict that is both moving and gripping and the ultimate resolution that comes about fulfilling the emotional needs of the readers and viewers.”

“A great textbook that teaches you what Pixar’s core story ideas all have in common and examines their character development process, unique, intricate story structure and use of theme, all of which are key to the studio’s storytelling achievements.”

— The Animation Bibles (Animataurus - A Close-up on Animation)

“No studio in history has cranked out as many hits in a row as Pixar that not only succeeded with global audiences but also with typically irascible film critics. This book spells out their formula in language even we marketers can understand!”

Pixar Storytelling is about effective storytelling rules based on Pixar’s greatest films. The book consists of ten chapters, each of which explores an aspect of storytelling that Pixar excels at. Learn what Pixar’s core story ideas all have in common, how they create compelling, moving conflict and what makes their films’ resolutions so emotionally satisfying. The book also examines Pixar’s character development, unique, intricate story structure and use of theme, all of which are key to the studio’s storytelling achievements. This book is great for writers interested in writing for animation or mainstream feature films, animators or aspiring directors who want to know how some of the best animated films work, and even Pixar fans or film buffs who are interested in learning more about the awesome world of storytelling.