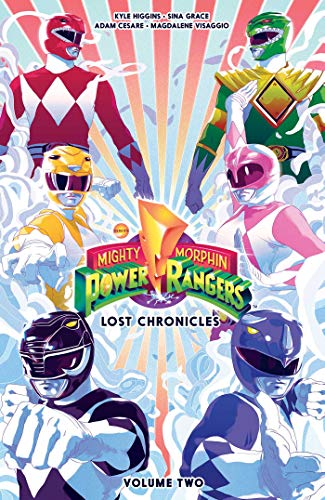 Collecting short stories celebrating the 25th Anniversary of the franchise and tying into the Mighty Morphin Power Rangers Shattered Grid event.
Celebrating 25 years of Power Rangers, renowned comic book creators from around the world pay homage to the franchise near and dear to their hearts with stories from across the morphin grid, including fan-favorite teams like Ninja Steel, RPM, SPD, In Space, and more! With stories from comic book all-stars Kyle Higgins (Nightwing), Joe Quinones (Peter Parker: The Spectacular Spider-Man), Sina Grace (Iceman), Marcus To (Weapon H), and many more, this morphinominal collection is a must-have for every Power Rangers fan.

Sina Grace is a writer and artist living in Los Angeles, CA who has earned prestigious nominations for both the GLAAD Media Awards and the PRISM Awards. He is best known for his slice-of-life memoirs at Image Comics, including Self-Obsessed and Nothing Lasts Forever; the highly anticipated reimagining of Jughead's Time Police at Archie Comics; and the critically-acclaimed, landmark Iceman series at Marvel Entertainment. Grace has been a part of the Power Rangers comic book series at BOOM! Studios from day one, illustrating variant covers for the chart-topping Mighty Morphin Power Rangers #1, along with both writing & illustrating one of the comic book stories celebrating the 25th anniversary of the pop culture phenomenon in 2018. Ghosted in LA, Grace's new original series at BOOM! Studios, will launch in July 2019.

Descripción Paperback. Condición: New. Paperback. Shipping may be from multiple locations in the US or from the UK, depending on stock availability. 112 pages. 0.249. Nş de ref. del artículo: 9781684153381