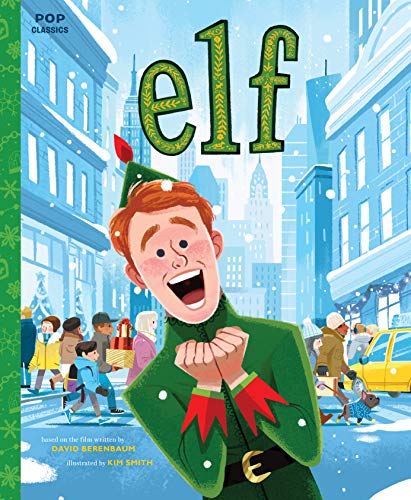 Descripción Quirk Books, United States, 2020. Hardback. Condición: New. Smith, Kim Ilustrador. Language: English. Brand new Book. When Elf was first released in 2003 it was an instant hit, and has become one of the few films of the new millennium to earn its place in the pantheon of classic Christmas cinema. Now fans can enjoy the hilarious and heartwarming story in a whole new way. Buddy the Elf has more Christmas spirit than anyone, but he s never quite fit in with the other North Pole elves. It all makes sense when he learns he s actually a human and his father is on the naughty list! Determined to bring his father some Christmas cheer, Buddy sets out on an epic journey to New York City, where he discovers the joy of revolving doors, unmasks a fake department store Santa, and works in a shiny mailroom. But Buddy s dad only cares about money and work! When Santa encounters disaster on Christmas Eve, can Buddy count on his new family to help him save Christmas? Kim Smith s adorable illustrations give a classic feel to this modern holiday tale. Featuring all of the iconic moments and laugh-out-loud lines from the film, this story of infectious Christmas spirit in the face of cynicism is a must-have for Elf fans of all ages. Series Overview: The films and TV shows that families love are reimagined as lively, colorful picture books featuring the iconic moments and characters of the original. Simple words are paired with a kid-friendly storybook format that s perfect for bedtime or storytime, plus all-new illustrations done in classic picture book style to make this series a great way for parents to share their pop culture favorites with a new generation. Though the movie and TV versions came first, you ll wonder if they weren t adaptations of these books, instead of the other way around!. Nş de ref. del artículo: AA99781683692201

Descripción Quirk Books, 2020. Hardcover. Condición: New. Smith, Kim Ilustrador. Hardcover. Upon its release in 2003, Elf was an instant hit. Since then it has become one of the few films of the new millennium to earn a place in the pantheon of classic Christmas cinema. And now f.Shipping may be from multiple locations in the US or from the UK, depending on stock availability. 40 pages. 0.484. Nş de ref. del artículo: 9781683692201

Descripción Quirk Books October 2020, 2020. Hardcover. Condición: New. Smith, Kim Ilustrador. This item will be released on October 6, 2020 and will ship to arrive on or shortly after that date. Firefly sells new and used books through our store front. We try to add a detailed description to as many titles as possible. If you have questions regarding this title, please contact us. Photos available on request. Nş de ref. del artículo: 278051