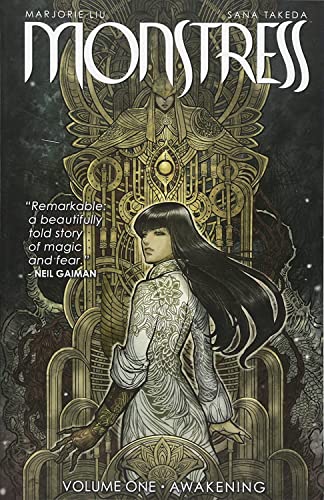 “If you want big, beautiful, terrifying, violent magic, Monstress is your next favorite comic.” -Cosmopolitan

NPR -- Gaudy beauty and extravagant horror twine around each other, as elegant as their subjects' sinuous hair and garments, in the remarkable comic Monstress. Liu's accomplishment is impressive. She's created characters who feel larger than life, but whose motivations and values are almost always obscure.

"Liu's accomplishment is impressive. She's created characters who feel larger than life, but whose motivations and values are almost always obscure.” ―NPR


“If you want big, beautiful, terrifying, violent magic, Monstress is your next favorite comic.” ―Cosmopolitan


"Takeda’s visuals recall realistic, gritty manga such as Lone Wolf and Cub, with magic and monsters to rival those of Hayao Miyazaki’s films.” ―Publishers Weekly

Set in an alternate matriarchal 1900's Asia, in a richly imagined world of art deco-inflected steam punk, MONSTRESS tells the story of a teenage girl who is struggling to survive the trauma of war, and who shares a mysterious psychic link with a monster of tremendous power, a connection that will transform them both and make them the target of both human and otherworldly powers.

New York Times bestselling and award-winning writer Marjorie Liu is best known for her fiction and comic books. She teaches comic book writing at MIT, and leads a class on Popular Fiction at the Voices of Our Nation (VONA) workshop. Ms. Liu's extensive work includes the bestselling "Astonishing X-Men" for Marvel Comics, which featured the gay wedding of X-Man Northstar and was subsequently nominated for a GLAAD Media Award for outstanding media images of the lesbian, gay, bisexual and transgender community. Prior to writing full-time, Liu was a lawyer. She currently resides in Boston.

Sana Takeda is an illustrator and comic book artist who was born in Niigata, and now resides in Tokyo, Japan. At age 20 she started out as a 3D CGI designer for SEGA, a Japanese video game company, and became a freelance artist when she was 25. She is still an artist, and has worked on titles such as "X-23" and "Ms. Marvel" for Marvel Comics, and is an illustrator for trading card games in Japan.