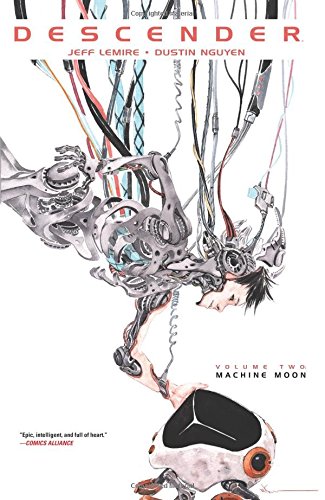 Young robot boy TIM-21 and his companions struggle to stay alive in a universe where all androids have been outlawed and bounty hunters lurk on every planet. DESCENDER is a rip-roaring and heart-felt cosmic odyssey, pitting humanity against machine and world against world to create a sprawling epic. Collects DESCENDER #7-11.

BOING BOING -- "Jeff and Dustin are accomplishing something special... "

BRIAN K. VAUGHAN, SAGA -- "Jeff Lemire has dreamt up an emotional, imaginative new universe, lavishly brought to life by the great Dustin Nguyen. I can't wait to see where they take TIM-21 next."

ENTERTAINMENT WEEKLY - "Your new sci-fi obsession is here, and its name is Descender..."

Young Robot boy TIM-21 and his companions struggle to stay alive in a universe where all androids have been outlawed and bounty hunters lurk on every planet. Written by award-winning creator, Jeff Lemire, Descender is a rip-roaring and heart-felt cosmic odyssey. Lemire pits humanity against machine, and world against world, to create a sprawling epic. Collecting issues #1-6 of Jeff Lemire (Sweet Tooth, Trillium) and Dustin Nguyen's (Little Gotham) critically acclaimed, bestselling new science fiction series! "New York Times Bestselling author Jeff Lemire has built a unique career as both the writer and artist of acclaimed literary graphic novels like Essex County, The Underwater Welder, Sweet Tooth and Trillium and also as one of the most popular writers of mainstream superhero comics with acclaimed runs on such titles as Green Arrow, Animal Man, Justice League and Hawkeye for Marvel and DC Comics.

Current projects include the original graphic novel ROUGHNECK to be published by Simon and Schuster in 2016, as well as the science fiction series DESCENDER with Dustin Nguyen and A.D. with Scott Snyder.

In 2008 and in 2013 Jeff won the Schuster Award for Best Canadian Cartoonist. He has also received The Doug Wright Award for Best Emerging Talent and the American Library Association's prestigious Alex Award, recognizing books for adults with specific teen appeal. He has also been nominated for 8 Eisner awards, 7 Harvey Awards and 8 Shuster Awards.
In 2010 Essex County became the first graphic novel to be included in the prestigious Canada Reads contest making it to the final five and winning the people's choice vote as best Canadian novel of the decade.

He lives in Toronto with his wife and son.