Artículos relacionados a Shells: A Pop-up Book of Wonder (4 Seasons of Pop-Up)

Shells: A Pop-up Book of Wonder (4 Seasons of Pop-Up) 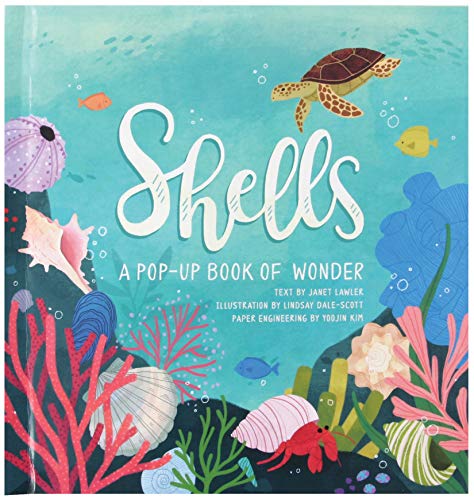 Along summer beaches, shells beckon with their timeless beauty and wonder. They provide protection for many ocean animals, populate colorful coral reefs, and sometimes surprise with a pearl inside! Fabulous interactive features and fun facts abound in this unique summertime pop-up book.

Janet Lawler resides in Farmington, Connecticut, USA. Her books have appeared in the Scholastic Book Clubs, the Children's Book of the Month Club, and in translation editions that include Spanish, Japanese, Hebrew, French, and Korean. Her nonfiction picture book, Ocean Counting (National Geographic) was named an Outstanding Science Trade Book for 2014 by the National Science Teachers' Association. EASTER PUPPY PARADE is Janet's 18th published book. Visit her website at http: //www.janetlawler.com/

Lindsay Dale-Scott grew up in Columbus Ohio and is an avid sloth lover. She studied at The Columbus College of Art & Design and graduated with a Bachelor's Degree in graphic design. Children's illustration and typography and design are amongst Lindsay's main interests. She draws her inspiration from nature, vintage children's books and graphic design. Lindsay currently lives in Cleveland, OH with her husband, two dogs and two bunnies.

Yoojin Kim is a paper engineer, book artist, and world traveler. Her wanderlust and fascination with flora and fauna is evident in her work, which is heavily influenced by both the geometric and organic structures found in nature. She holds a BFA in Printmaking from Maryland Institute College of Art and spends her time designing dimensional products for personal and commercial clients. She resides in a cozy New Haven apartment with her curious hedgehog, Kimchi.