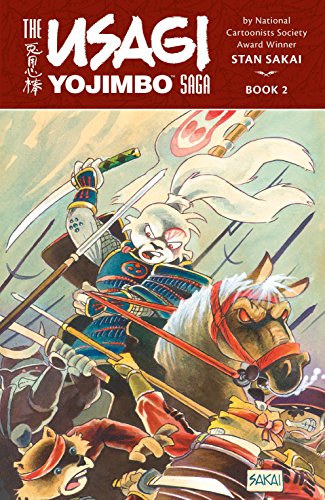 The adventures of Stan Sakai's beloved Miyamoto Usagi hit an early peak in this new deluxe compilation! Volume Two features the rabbit ronin's first encounters with the Lord of Owls, Inspector Ishida, and more, and is highlighted by the Eisner Award-winning Grasscutter, a grand tale assembling nearly all the series' characters in a struggle over the grasscutting sword of Japanese legend, with the fate of the nation in the balance! This omnibus collects Usagi Yojimbo Book 11: Seasons, Usagi Yojimbo Book 12: Grasscutter, and Usagi Yojimbo Book 13: Grey Shadows.

Stan Sakai was born in Kyoto, Japan, grew up in Hawaii, and now lives in California with his wife, Sharon, and children, Hannah and Matthew. He received a Fine Arts degree from the University of Hawaii, and did further studies at the Art Center College of Design in Pasadena, California. His creation, Usagi Yojimbo, is the story of a samurai rabbit living in a feudal Japan populated by anthropomorphic animals. It first appeared in Albedo Comics in 1984. Since then, Usagi has been on television as a guest of the Teenage Mutant Ninja Turtles, and as toys, on clothing, in comic books, and in a series of trade paperback collections. In 1991, Stan created Space Usagi, the adventures of a descendant of the original Usagi, dealing with the samurai in a futuristic setting. Stan is also an award-winning letterer for his work on Sergio Aragonés' Groo the Wanderer, the Spider-Man Sunday newspaper strips as well as Usagi Yojimbo. He is the recipient of a Parents' Choice Award, an Inkpot Award, multiple Eisner Awards, two Spanish Haxturs, an American Library Association Award, and a National Cartoonists' Society Division Award. Usagi Yojimbo Book 12: Grasscutter was used as a textbook in Japanese history classes at the University of Portland. The author lives in Los Angeles CA.