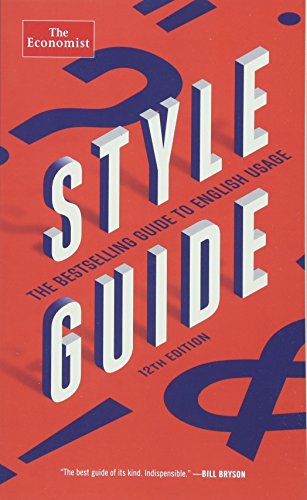 This expanded twelfth edition of the bestselling guide to style is based on The Economist's own updated house style manual, and is an invaluable companion for everyone who wants to communicate with the clarity, style and precision for which The Economist is renowned.

As the introduction says, 'clarity of writing usually follows clarity of thought.'

The Economist Style Guide gives general advice on writing, points out common errors and clichés, offers guidance on consistent use of punctuation, abbreviations and capital letters and contains an exhaustive range of reference material--covering everything from accountancy ratios and stock market indices to laws of nature and science.

Some of the numerous useful rules and common mistakes pointed out in the guide include:

Edited in London since 1843, The Economist is a weekly international news and business publication, offering clear reporting, commentary and analysis on world current affairs, business, finance, science and technology, culture, society, media and the arts.